Christmas is a Time for Second Chances: Reviewing The Boys Upstairs by Jane Lebak 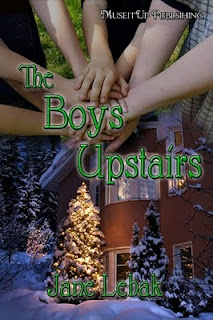 "Yeah, you've certainly changed." Kevin shoved aside his empty plate. "I remember when you would have been the kid bringing the knife into the church."

"Would you rather I spent the rest of my life in jail?"

"That's not what I would have rather had at all, and you know it."

"Please don't start this again," Jay said. "You know I can't stand it."

"I've told you I accept you the way that you are."

"You say that as though I have a disease." Jay looked at his lap. "I love you from the bottom of my heart, and I pray for you every day. I want nothing but good for you—and in return, you'll tolerate me. Like I'm an aged flatulent uncle you visit once a week for the sake of your long-dead grandmother."

Jay Farrell is a priest with overwhelming responsibilities and very few resources. He houses homeless boys in his rectory, runs a soup kitchen, and ministers to an inner-city parish. He is no stranger to overcoming big odds, but one of the most troubling obstacles is in his personal life.

Jay's brother, Kevin, is a cop who has seen so much evil that he's stopped believing in God and hasn't spoken to Jay for a long time. When Kevin stops by Jay's rectory to drop off three more needy children, it puts them in contact on a continuing basis as they must work together to help provide food and clothing for the newcomers.

Those are far from being the only problems which need solving. Nick's anger at the parents who abandoned him makes him lash out in anger at the other homeless boys. Holly is barely getting by on her waitress salary and has given up on ever finding love. The three children who are dropped off with Father Jay are trying to find a way to stay together instead of being split up into separate foster homes.

Although these are not the sorts of situations that I would normally choose to read about, I found myself being drawn into this novella through the characters' motivations and back stories. In uncovering what happened to Jay in Iraq, watching Holly's defense of a fellow waitress, watching for changes in Nick that would echo those we are told took place in another boy, and in wondering what is haunting Kevin about a simple memory of a lit front porch, I was pulled into a world with characters I wanted to know better.

Since this is ultimately a book about free will, second chances, and faith, I was quite interested in Lebak's handling of touchy conversations that echoed the sorts of situations we might face in real life. A confrontation with a family who uses God to dodge out of paying a bill and Kevin and Jay's struggles were absorbing without seeming preachy or out of place.

I also liked very much the honesty the priest shows with the children when they ask about his past. It is not only what they need to evaluate their situation and the choices they contemplate, but also an insight into the priest's ability to work with the children that have found their way into his care. Lebak made a gutsy choice in showing this good man taking care of these homeless kids. Many would think of  the recent sex scandals and choose a different plot. Seeing Jay caring for these children is a reminder that most priests are good men who want nothing more than to honorably minister to those in their care.

I enjoyed Lebak's previous novel, Seven Archangels: Annihilation, but I found that her writing style in this work flowed much more naturally. I especially liked the fact that she didn't tell us everything about what each character was thinking which left some areas open for further reflection, such as the very brief comments that Kevin receives which become a turning point in his thinking.

The downside is that this is only novella length, about 100 pages. It is crammed with plot points that have to be resolved in a fairly short time. Sometimes this resulted in important ideas being hashed out in a couple of pages of pointed conversation which would have been more naturally conveyed if the author had had the luxury of more pages to spread things out in. Also, there are some characters that it would have been nice to have more background on. For example, Mrs. D. is someone who I would have liked to know more about than we were told, especially given the important resolution she helps with at one point in the book. I realize these criticisms seem like a direct contradiction to my appreciation for the openness I praised in the previous paragraph but these are not moments of subtlety but of skimming over details for lack of space.

I definitely recommend this novella.  I would really like it if Jane Lebak wrote another book about these characters but took more time to ... breathe ... while doing so. I enjoyed what she wrote but want more of it. I could see this novella being the launching pad for a book or two along the lines of Jan Karon's Father Tim books but without the treacly sweetness and with more Catholic down-to-earth hardheadedness. C'mon Jane. Give us more!

The book comes out tomorrow, December 3. Go get it and get a discount until December 10 from the publisher.


"Get 25% off any purchase from today until December 10th.
Use code: HC2010D at checkout in the discount code box before going to Paypal."