Reviewing "God Is Not One": Sloppy Writing and Muddled Logic 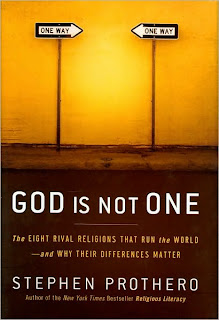 Should I Read It?
No.

Short Review
Sloppy writing and muddled logic are no match for a good fact-checker at your side, kid.

The Whole Story
I was so pleased to be offered a review copy of God is Not One from The Patheos Religion and Faith Book Club. (See more about them and the PBS show related to this book at the end of the review.) This is just the sort of book that intrigues me and, moreover, looks as if it helps us all understand each other better.

I completely agree with Stephen Prothero's premise that the world's major religions are not the same and that worshipers' different cultures provide a unique lens through which to seek God. In fact, this was one of the main concepts I took away from reading Huston Smith's The World's Religions some time ago. This is also the message that I got from the Catholic Catechism1 (839-848) that we cannot know how God is reaching others in their various circumstances (despite the Church's obvious insistence on the fact that Catholicism has the clearest view of God). Therefore, non-Catholics can find God in ways we cannot imagine.

I also share Prothero's opinion that there is a trend to claim that all religions are "one big happy family." So you can imagine how disappointed I was when I found Prothero's book did not, in fact, make it easy to reach those self-same conclusions, despite his stated purpose in the subhead: The Eight Rival Religions that Run the World — and Why Their Differences Matter.

In the Beginning...
I suppose I shouldn't have been surprised. The subtitle itself began by talking about "rival religions" which to my mind didn't make sense at all, from the point of view of understanding different religions. My understanding of the word "rival" is largely borne out by the Merriam-Webster definition: a) of two or more striving to reach or obtain something that only one can possess (b) one striving for competitive advantage. One could have rival governments. Rival companies, even. But rival religions? Not really.

One could understand it if using a third definition of rival of "equal or peer" which is not what springs to mind. It also is not what Prothero promotes in the book.  Do these religions "run the world?" Again, this sounds as if we are talking about the Fortune 500, not ways to find and worship God.

Prothero's lack of focus, forced conclusions, and unscholarly generalizations continue the trend he sets in the subhead. Surprisingly, he does manage to have a relatively accurate overview of the different faiths while slanting and misstating many details. This in itself is an accomplishment of sorts which one does not see often. I suspect this is from taking a shallow look at each faith while picking and choosing sources out of context. At least, that is what I found in the areas that I knew the most about, as we shall see.

Facts Are Meaningless. You Could Use Facts to Prove Anything That's Even Remotely True!2
Prothero does not seem sure himself what he is trying to prove. Sometimes he mixes governments with religions, thus mixing apples and oranges. When he's tossing that fruit salad, he also doesn't worry too much about accuracy. Let us just examine this sample.

I am really unaware of Christian suicide bombers or drone attacks, as were any of the sources I checked. I know of Muslim suicide bombers. I know of government run drone attacks. My copy of the book is marked with many examples of blatant inaccuracies and muddled comparisons simply in the few areas that I know well (Catholicism and overall Christianity). Prothero does not provide any documentation for this claim. He just makes it and sails on to point out that Muslims and Christians have lived in peace in the past, such as in medieval Spain. Why, oh why, does my mind insist on reminding me that such peace was only after Muslim conquest and under Muslim rule? Fact checking is a real problem for Prothero's beautiful examples much of the time.

Do As I Say, Not As I Do.
This leads us to Prothero's second besetting sin. Despite his stated desire to show us why religions are different and have the right to be so, he cannot help trying to make them equal, especially when it comes to comparing Christianity with any other religion's bad qualities. Setting aside the above example, which certainly illustrates that tendency, let us examine this statement.


Widespread criticisms of jihad in Islam and the so-called sword verses in the Quran have unearthed for fair-minded Christians difficult questions about Christanity's own traditions of holy war and "texts of terror." ... It is not just the Old Testament that is flesh devouring and drunk on blood, however. "I came not to send peace but a sword," Jesus says (Matthew 10:34).

Christians are doing a disbelieving double-take right now as they know Jesus was not talking about a literal sword. He was giving a warning about how being a believer would cause dissension and separation from those they hold dear, as well as persecution for believers. To call  that statement "flesh devouring and drunk on blood" is to show how little regard the author has for accuracy and how desperately he grasps at straws to build his comparisons at times.

You Keep Using That Word. I Do Not Think It Means What You Think It Means.3
The previous example points us to Prothero's third major problem. He continually takes information and quotations out of context, playing Twister to use them in making his points. In the introduction, I was jolted when he quoted Huston Smith and then went on to cast him as teaching that every religion was the same.


It is possible to climb life's mountain from any side, but when the top is reached the trails converge. At base, in the foothills of theology, ritual, and organizational structure, the religions are distinct. Differences in culture, history, geography and collective temperament all make for diverse starting points. ... But beyond these differences, the same goal beckons.

Even if one has not read Smith's book, the quote itself makes it obvious that what he is saying is that all believers seek Truth, however diverse their methods or beliefs. I only wish that I had a deeper knowledge of other major religious figures who Prothero dragged into his argument, such as Gandhi, Swami Sivananda, and the Dalai Lama. Once Prothero has been proven so unreliable with known sources, it is difficult to accept his word for similar snippets of text.

You're More Like a Game Show Host.4
Prothero's breezy style causes occasional faux pas which made me wince when reading such statements as:


Hinduism is an over-the-top religion of big ideas, bright colors, soulful mantras, spicy foods, complex rituals, and wild stories. One of the wildest of these stories concerns how Ganesha got his head.

It's always so amusing hearing wacky stories about people's divinities, isn't it? What zany characters they worship!

Yes, it did seem a bit disrespectful to say the least. I wish I could tell you that was the only example.

More than that though, it leads into a frustration of  mine with the text. The descriptions of the different religions vary widely as to what to base a comparison of "different" from. Prothero criticizes Huston Smith for showing the ideal of each faith. However, those ideals are quite helpful in knowing where adherents vary within denominations. Certainly those ideals are helpful in comparing the different religions to each other. Prothero much prefers to dwell on differences, often discussing one specific point in-depth, a cultural confusion, or argument flash-points before ever getting down to describing what people actually believe. I often would skip ahead to get the overall context or resort to Wikipedia for a concise description before diving back into the dizzying array of information poured out, for example, about Ganesha's head, Hindus around the world (past and present), and the many points of disagreement among Hindus about whether their religion is even a religion.

In the End
As I mentioned, Stephen Prothero does have the big overall picture generally correct. I really enjoyed learning about Yoruba, which I had never heard of before, and also his overview of atheism. It is too bad that his concept is conveyed via a flawed, superficial approach. It would be better for those  interested in how religions are different to read The World's Religions

by Huston Smith or World Religions

by John Bowker instead. Those books will do much more to lead to an informed view than God is Not One.


For More Resources, Reviews, and Conversation About This Book
The Patheos Book Club has more reviews about God is Not One and interviews with author Stephen Prothero. They declined sharing this review there because the publisher pays to have books included in the book club and Patheos felt this was too negative. I took the liberty of sharing it here anyway.

The American Experience on PBS is running God In America this week which is related to this book. It looks like a fascinating view of the role of religious belief in our country. Check out both sites.

1: (848) Although in ways known to himself God can lead those who, through no fault of their own, are ignorant of the Gospel, to that faith without which it is impossible to please him, the Church still has the obligation and also the sacred right to evangelize all men.