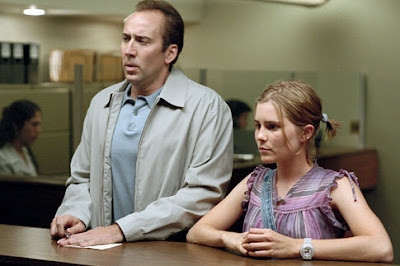 Nicholas Cage is a con artist whose successful cons can't compensate for the fact that his numerous phobias leave him no way to have any personal life. Sam Rockwell is his partner and they are in the middle of pulling off a potentially lucrative scam when Cage discovers he has a teenage daughter who arrives unexpectedly to live with him. What then unfolds is a story of learning to parent interspersed with pulling off the con. The two stories become entangled which leads to increasing tension.

You don't get much more of an anti-hero than Nicholas Cage's character in this role. As for style, granted it is that of the 60's more than today but that is more than compensated for by the sheer attraction of watching the con go on. More than anything, however, I was struck by the sheer potential for change and growth that Cage's character discovers. The end, which I won't reveal here, struck me as an extremely Catholic one.