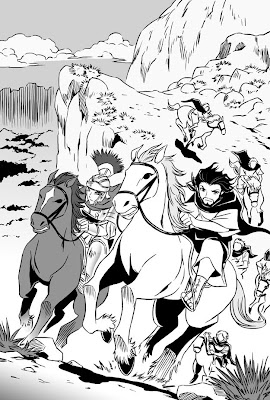 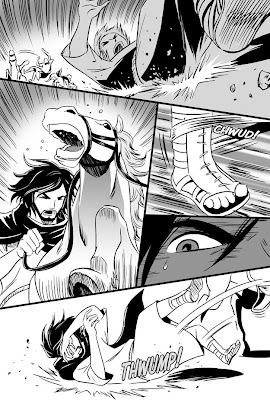 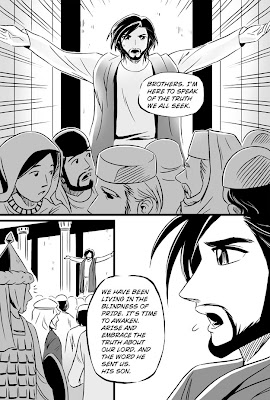 We all know that with St. Paul it was always personal. Right?

This is not specifically Japanese manga, but a graphic novel that should entertain young readers (12+).

Paul's a young Jewish firebrand who kills or captures anyone who follows the new sect of Christianity. His closest friend, Septus, is a renegade Roman officer who helps Paul dominate the countryside. Paul gains a mentor but loses his friends when he finally embraces truth. He faces death at the hands of his closest companion, betrayal, constant danger, and destroyed love. Lose yourself in this epic reimagining of first-century Palestine.

I really enjoyed Paul: Tarsus to Redemption. One thing you've got to admit, scriptural stories are bigger than life (even though they usually were life) and lend themselves very well to dramatic depictions graphically.

The only point that somewhat confused me was the beginning ... who was Paul's blond buddy, why were they going to see the rabbi, and so forth. However, I believe that I was bogged down by my adult knowledge of St. Paul and trying too hard to connect it with the book. Once I "let go" then I was able to fully sink in and enjoy the story telling.

Likewise, I appreciated the ending of the book (is that a potential sweetheart we see on the scene?) completing the story full circle, even though it is clear that Paul will be traveling on. In fact I went back and read the beginning again. Whereupon it all made perfect sense. This graphic novel tweaks St. Paul's story only in the sorts of details that the best storytellers use to make their tales come alive. It is true to Biblical roots.

As I mentioned when I excitedly posted because this book was on the way ... if only Paul had shed some of those streaming manga tears, my joy would have been complete. He comes thiiiiiis close. So near and yet so far. Well there is always volume two to hope for. 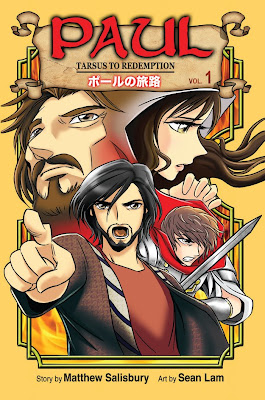 I never met a girl yet who didn't enjoy stuff written for the guys, but in case you've got more feminine readers around than I did you might want to check out the upcoming Judith: Captive to Conqueror.

The Israelites have returned to their homeland after the Babylonian captivity, but now a new threat looms on the horizon. Holofernes, the wicked and conniving general of the Assyrian army, is sent to conquer all the world's temples, and now heads toward the Promise Land. But in Bethulia, the one city that stands between the Assyrians and Jerusalem, is Judith, the only woman with enough faith and courage to defend the Temple with her life.