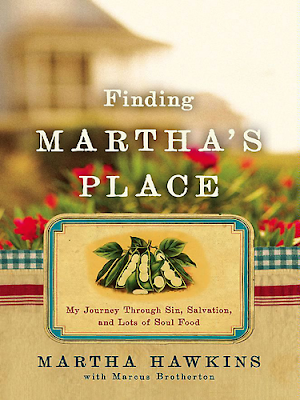 Finding Martha's Place: My Journey Through Sin, Salvation, and Lots of Soul Food
I first found this through The Good Cook book club. Based on their description I thought there would be much more about food in it. However this book was so astonishing that I forgot all that early on. Any descriptions you read that are longer than one sentence make you think that Martha was a hard-driving, determined woman who pushed her way to success despite long odds. It is true that Martha did succeed and that she persevered, however, one does not get the feeling that she did it through sheer force of personality. Martha gives the impression of being a gentle, loving person who nevertheless kept doggedly marching in the direction she thought she should go.

For a lot of her life Martha was just doing what most of us do when we are little ... living and trying to make sense of the world. The turns her life took and the way she pushed everything bad way down inside left Martha with mental illness. Her determination is seen in her desire to not leave her four children without a mother so she fights her way back to equilibrium. Along the way, she clings to the verse (Isaiah 61:1) that haunts her after flipping through a Bible one day and having it fall open at that spot.

The Spirit of the Lord GOD is upon me; because the LORD hath anointed me to preach good tidings unto the meek; he hath sent me to bind up the brokenhearted, to proclaim liberty to the captives, and the opening of the prison to them that are bound

This sets her not only on the right path to her place but serves as a beacon to the place where she can help others. Martha is matter of fact and tells the story just as if you were sitting at her restaurant having some tea. (Yes, food does come into the picture eventually.)

Extremely inspirational and moved me deeply but not sugary at all. Highly recommended.
By Julie D. at April 23, 2010