If You Have a Loved One with Alzheimer's ... You Need This Book 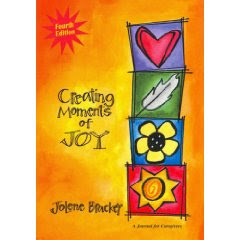 Creating Moments of Joy: A Journal for Caregivers, Fourth Edition

When a person has short-term memory loss, his life is made up of moments. But if you think about it, our memory is made up of moments, too. We are not able to create a perfectly wonderful day with someone who has dementia, but it is absolutely attainable to create a perfectly wonderful moment; a moment that puts a smile on their face, a twinkle in their eye, or triggers a memory. Five minutes later, they won't remember what you did or said, but the feeling you left them with will linger.

Tom's mom recently was diagnosed with Alzheimer's, delusional. In her case, that also means she is increasingly angry and hostile because of imagined situations that we can't predict. It is a big challenge for everyone to deal with.

One of the biggest helps for Tom and me is the recommendation of this little book. I find the description to be somewhat misleading as it is not about creating moments of joy together in the way we interpreted it initially, which would be for those great little moments of laughing together. Much more helpful is that this book gives many examples for helping you understand more about where your loved one is mentally. This allows you to come much closer to making them happy which consequently makes you happy as well.

For example, understanding that an Alzheimer's patient tends to regress mentally in age would help a son whose mother screams when she sees him but can talk to him happily on the phone. Hint, mentally she is in her forties and her mind's eye of her son is not a 50-year-old man but a young fellow in his twenties. His voice sounds the same even though in person she thinks he is a strange man who has broken into her room. Another idea would be that someone further along in Alzheimer's may be mentally about three years old. Therefore, they would be proud that they dressed themselves and not understand the distress of a daughter upon beholding her mother with her bra and underwear on over her dress.

These are some of the simplest examples but they give a flavor of the very helpful scenarios and advice contained in this gem of a book. We are both midway through but are continually finding ourselves bringing up examples to help in trying to figure out how best to deal with Tom's mom. And when I say "deal with Tom's mom" I hope that you understand what I really mean ... is to make her happy.