In Bruges: Violent, Profane, Funny ... and Yet a Perfect Lenten Movie

Ray: What's up there?

Ken: Ray, you are about the worst tourist in the whole world.

Ray: Ken, I grew up in Dublin. I love Dublin. If I grew up on a farm, and was retarded, Bruges might impress me but I didn't, so it doesn't.

In Bruges is one of those quirky art movies that there is no way to describe well. A tale of contrasts, it follows two hit men, Ray (Colin Farrell) and Ken (Brendan Gleason), who have been told to hide themselves by traveling to Bruges. Part of the contrast comes from that fairy tale town with these violent men in it. Ken is delighted by the historical aspects and spends all his time sight seeing. Young, callow Ray is bored stiff and only interested in chasing pretty girls. Eventually we find out why the hit men are hiding out and see that Ray has hidden depths, which Ken feels makes him a person worth a second chance. Eventually we also are introduced to their boss, Harry (Ralph Fiennes), who provides yet another contrast. The contrasts provide plenty of opportunities for humor as well as pathos.

Along the way, Ken and Ray see Hieronymus Bosch's art (see below) and the movie becomes almost a mirror of the painting in some ways. Which is to say that while we think we have a grasp on it, there are also surreal elements that are hard to integrate into the whole.

I liked it but was unable to know how to think about it until we watched some of the DVD extras where the actors talked. They had been very thoughtful about it. One remarked that she liked it because Hollywood treats extreme violence so casually and this movie showed that no matter what these people did they were still human beings who were affected by their actions. Well put. In short this is a thoughtful, interesting movie about sacrifice, redemption, and above all what it means to be human.

Warning: it is R-rated for violence and language. The violence is well telegraphed so that I was able to look away every time. As well, the language is frequently and extremely profane. This is a sign of the times, naturally, but one gives a bit of a sigh for the days when coarse hitmen could be portrayed without saying, "f***" every other word. No one who grew up in the home of my youth would be surprised by that word, but I do feel it shows an extreme lack of creativity. Ah well ... 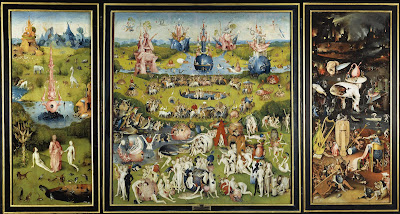 The Garden of Earthly Delights by Hieronymus Bosch, 1500-1505
Click through and look at this close up. I would swear there are some space ships in there.
By Julie D. at March 24, 2009