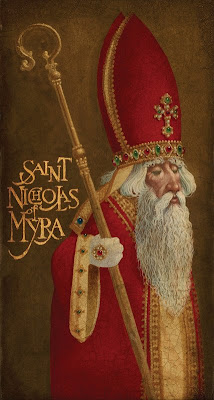 St. Nicholas was born in Lycia, Asia Minor, and died as Bishop of Myra in 352. He performed many miracles and exercised a special power over flames. He practiced both the spiritual and temporal works of mercy, and fasted twice a week. When he heard that a father who had fallen into poverty was about to expose his three daughters to a life of sin, Nicholas took a bag of gold and secretly flung it through the window into the room of the sleeping father. In this way, the three girls were dowered and saved from mortal sin and hell.
Read more at Catholic Culture

We came to the realization of the true day to celebrate the saintliness of Nicholas very late and our kids were too old to get into it though I made the effort for a few years to leave chocolate coins in their shoes outside their door. Evidently a lot of the stories floating around are impossible to verify so I will leave you with this nice food for thought from Catholic Culture where there are prayers, recipes, and activities.

Not much is known about this 4th century bishop, but that doesn't diminish his popularity around the world, both in the East and West. It is known that Nicholas was born in Lycia in Asia Minor (modern-day Turkey) and died in 352 A.D. as the Bishop of Myra. All other stories that surround Nicholas illustrate that he practiced both the spiritual and corporal works of mercy. He was generous, strove to help the poor and disadvantaged, and worked tirelessly to defend the faith. His legends of generosity and a slip of the tongue from other languages has made St. Nicholas or Sinterklaas into today's Santa Claus.