Do You Believe? Reviewing "My Cousin the Saint" 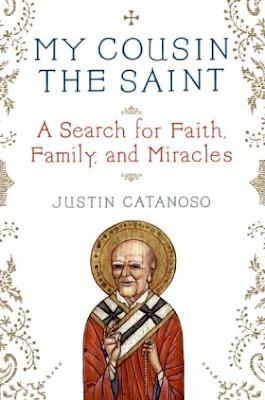 Get the book here.

"Tell me about the miracles," Danny asked, bursting into an eager smile. "What miracles did your cousin perform?"

All right, I can do that. It's just another couple of stories. I started in on them as matter-of-factly as recounting the details of a ball game. Danny was looking at me funny again, like I was missing the point of what I was actually saying.

He leaned in over the table. "Do you believe, Justin?"

Believe in miracles? Me? Am I supposed to? I honestly had never thought of that and told him so.

"Well, I believe," Danny said with an urgency that struck me as entirely genuine. "Goodness, Justin. He's your cousin. You've got to believe!"

Justin Catanoso's discovery that he is actually related to an honest-to-goodness, canonized Catholic saint begins a journey that takes him not only to a discovery of family and heritage, but also on the exploration of a faith that had long fallen by the wayside.

In some ways, Catanoso's story is the dream of every American whose family lost their roots when they came to this country. He receives an email one day from a woman who wonders if they might be related. It turns out that the American branch of the family has long been missing a deep heritage rooted in the Italian countryside. As well, Catanoso discovers that his grandfather's cousin, Padre Gaetano Catanoso, is being considered for canonization. This unbelievable news, prompts a family visit to Italy where they are lovingly embraced by their newly found relatives and where they begin hearing stories about "the saint."

... Don Guiseppe Agostino, a young priest who was supposed to accompany the archbishop that day, received that startling news [that the archbishop had been killed]. Not knowing what else to do, he woke Padre Gaetano, who also lived at the seminary. Noticing Don Agostino's agitation, the older priest responded, "Remain calm. Everything is a mystery. In domino."

Together, they went out on foot to inform Monsignor Montalbetti's mother.

"It is late and you have not retired for the night," said the mother, Carolina Portman, answering her door. "Has something happened?"

Rather than explain, Padre Gaetano bowed his head and said barely above a whisper, "In domino." Clutching her hands to her heart, the woman understood at once. "God is passing through my life," she moaned and invited the priests inside her home. There, in a small chapel, she fell to her knees and, with anguished cries, prayed for nearly an hour. To the young priest with him, Padre Gaetano urged, "Remain still. Don't move. Adore God in this moment and take example from this great mother."

"At times he seemed naive," Don Agostino recalled later, "but instead he had a shrewd depth. So it could be understood that his was a suffered peace, a word matured in silence, a smile born of real passion."

Returning to the seminary in the middle of the night, the two priests roused the others to meet in the chapel, where Padre Gaetano led them in prayer. "He had such a presence," Don Agostino recalled. "That evening remained with me as a vital lesson on the meaning of faith."

Catanoso tells the parallel stories of his immigrant grandfather and his saintly cousin vividly and honestly. In so doing, he skillfully pulls us into the uniquely American immigrant experience of his grandfather finding his vocation as an Italian grocer in New Jersey. We see Padre Gaetano tirelessly work to improve Italian peasant life at a time when it often meant a brutish existence of ignorance and want simply because there were no other options. As Catanoso's Uncle Tony fought in World War II he wound up in Italy and that portion of the American experience is also conveyed skillfully while weaving in Tony's AWOL search for family roots.

This would be enough for most memoirs but it is merely a portion of Catanoso's story. The discovery of extended family and his saintly relative comes at a crucial time for his family as his brother, Alan, begins waging a grim fight against cancer. The many devout Catanosos begin praying to "Uncle Gaetano" for a miracle. We become just as engrossed in the fight for Alan's health. Will a miracle save him?

It is at this point that Justin Catanoso begins grappling with his faith. Raised Catholic, he had fallen away from his faith and did not know what to believe any more. Again, in many ways this parallels many Americans' struggles with faith and with the Catholic Church in particular. What are miracles? What does it mean to be a saint? What does it mean to be related to a saint, if anything? A typically pragmatic and independently minded American, Catanoso honestly recounts his struggles, questions, and doubts. In the process, he interviews Vatican officials, recipients of Padre Gaetano's miracles, believers, and skeptics. As Catanoso uncovers facts and explanations, will he be able to find for himself a real and lasting faith?

"For many people, there comes a time when you just start asking fewer questions because you accept that there are now answers to be had; you have to trust," Father Louie explained. "You search and you search until ultimately, you have to say: 'I believe.' I don't know if that's going to happen to you. You're a pragmatist. You're a rationalist. You're very American. That doesn't mean you're doomed. You have to be true to yourself. You have to be honest. But basically, it all comes down to one thing: Faith is a gift. Are you accepting the gift?"

We become equally engrossed in the search to discover just what a saint shows us as believers. Catanoso's quest becomes ours and, if we are honest, we must contemplate our own faith, belief, and the reality that we are all called to be saints.

On a side note, I found it quite interesting that he got a certain measure of reassurance about the Church from reading "Why I am Catholic" by Garry Wills, since that is a book that many faithful Catholics including myself would avoid due to Wills' criticism of certain tenents of the faith. It is a good lesson that an honest and tenacious seeker can ferret out the information they need in many more places than we could predict.

This is an absolutely fantastic book by a talented, honest, and compelling writer. It is going to be on my list of top books of 2008. Highly recommended. 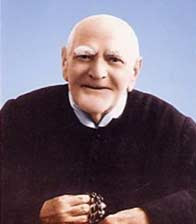