Opening the Scriptures: A series that lives up to its name 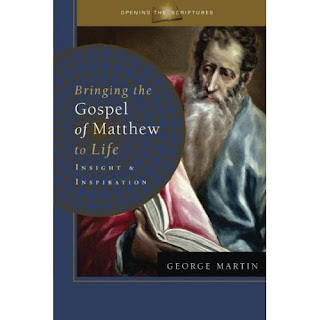 Bringing the Gospel of Matthew to Life:
Insight and Inspiration
(Opening the Scriptures series)
by George Martin

"Were not our hearts burning [within us] while he spoke to us on the way and opened the scriptures to us?"
Luke 24:32

The structure of the book follows this outline as Matthew is covered, section by section:


Over the years I have used many scriptural commentaries, some Catholic and some Protestant. Each has their advantages but this is the first I have encountered that has gripped me with such interest that I read it to the exclusion of all else. After perusing so many commentaries, I thought that I had a grasp of the basic considerations for many of the most commonly quoted gospel passages. Although Martin definitely covers what I already might have known from other sources, he does so with many citations to Old Testament passages that other sources have not necessarily included. As well, he is continually surprising me with a consideration that I had not thought of before. It may be a subtle point but is usually a telling one and has given me much food for thought already. I am positive that Tom already is tired of me piping up with, "Hey, listen to this!" after only reading 80 pages so far. For example:

[The Homage of the Magi
1 When Jesus was born in Bethlehem of Judea, in the days of King Herod, behold, a magi from the east arrived in Jerusalem, 2 saying, "Where is the newborn king of the Jews? We saw his star at its rising and have come to do him homage." ...]

2 The magi come to Jerusalem saying, "Where is the newborn king of the Jews? We saw his star at its rising and have come to do him homage." They observe a star at its rising--at its first appearance in the sky. What might they have seen (a supernova? a conjunction of planets? a comet?) is a matter of conjecture, but Matthew's concern is the significance of what the magi saw, not its nature. The magi interpret the rising of the star as signaling the birth of a king of the Jews. There was ancient belief that heavenly signs marked the birth of great men. Some Jews applied the Scripture passage, "A star shall advance from Jacob" (Num 24:17), to the coming of the Messiah, and the magi may have known of this. The magi come to Jerusalem and ask about the newborn king of the Jews so that they may do him homage. The star alerted them to his birth, but Matthew does not portray it guiding them on their journey. The magi simply come to the Jewish capital city -- Jerusalem -- looking for its newborn king.

This may seem obvious to everyone else but it simply never occurred to me that the star was what began the magi on their journey but that they simply had to apply their own logic after that in going to Jerusalem since that would be a good place to begin looking for the king of the Jews. Later in the commentary, Martin points out that Herod hears about the magi, calls the priests and scribes to him to ask where the messiah was to be born, and then calls the magi to tell them to look in Bethlehem. Now, he is doing all this for his own reasons, which we know through hindsight are nefarious. I had never caught that sequence of events so clearly ... that Herod ascertained the location and then summoned the magi. I just never read the text that clearly.

Then Martin sums it up for us in another connection that I'd never made, and couldn't have made without having the previous sequence pointed out to me.

9 After their audience with the king they set out. The magi begin their quest for Jesus because of a star, a revelation through nature. (Paul writes that God reveals himself through his creation: Rom 1:19-20.) Natural revelation goes only so far: it leads the magi to Jerusalem, but not yet to Jesus. God's revelation through nature must be completed by God's revelation to his people and through their writings, the Scriptures. The prophet Micah [quoted to Herod by the scribes and Pharisees] provided the link that leads the magi on their next step toward Jesus. ...

Could you hear my mind blowing? That made such sense, clicked into place so perfectly, yet I had never come across that before.

It is not a slender book, clocking in at 668 pages, however not one page has been wasted. As you can see from above, the care which Martin gives to the commentary requires length in order to be easily understood. His thoroughness also can be appreciated when one considers that the selected bibliography contains 89 books. This book also has both a Nihil Obstat and Imprimatur which are like a Catholic Church seal of approval on the accuracy with which the facts reflect Church teachings.

Word Among Us and George Martin are to be lauded for this series which I hope will continue at least through the Acts of the Apostles. I especially appreciate having relevant Old Testament passages quoted in their entirety so that the flow is not interrupted while I dash to the Bible to see the related text. Let's face it, few of us go to the actual trouble of doing that, although we should, so this is doubly welcome. As well, I like having the background information reference given wherever it might come up as a question. It is wonderful not having to thumb to end notes or search the index to find extra information.

It is still true that no one commentary covers every aspect of scriptural commentary. Others have a more specific focus on Church fathers or archaeology for example. I will still be using them. However, this is probably the most complete I have come across yet and will be the one I recommend for anyone who is interested in really learning what scripture can show us when we take the time to read through it slowly, with attention, and with prayer.

Word Among Us also generously sent Bringing the Gospel of Mark to Life, mentioning that they had heard some comments that the books were "too scholarly" and this concerned them as the books are specifically meant to be easily accessible to any level of knowledge from beginner to scholar. After reading some from both books, the only explanation I can imagine for those comments are that perhaps the purchasers expected the commentary to be similar to that of Word Among Us devotional magazine. You can see, by clicking through on the link, that the commentary in that publication is entirely personal and designed for reflection on relationship. Martin's commentary, although based on explaining the scripture verses, is no less accessible and no less suited for personal reflection. In fact, in the introduction he says that his "fondest wish" is that readers will be able to use these books for lectio divina (sacred reading) and prayer. I believe this is an entirely valid use and, in fact, am planning on this use myself.

I do have one criticism. The scripture passages from Matthew quoted in their entirety at the beginning of each discussion need to be visually delineated more clearly. Currently these sections simply blend into the overall pages which makes it very difficult to pick out where a section begins or ends. As I begin each chapter, I have been using a red pencil to box in the scripture. This has made a big difference in helping to organize the page visually, for me at any rate. Certainly it makes each chapter less intimidating when one can leaf through and see the many "sections" into which it is actually divided. Although this quibble would seem minor, I hope that the publishers of future editions would consider it.

I will be including nuggets on this blog as I continue reading through Matthew. For those who wish to begin with Mark, I leave you with this background information which, again, blew my mind, as I hadn't ever considered what he says about John the Baptist. I also appreciate the fact that Martin spends almost as much time reminding us not to read into Mark what we know from other sources as he does in other commentary. This section also gives an excellent example of Martin's extension of his commentary to an idea for our personal reflections.

COMMENT: TO READ MARK We will be most sensitive to the message Mark wishes to proclaim in his gospel if we read it as a Gospel in itself. We bring a great deal of knowledge to our reading of Mark, including what the Gospel of John tells us about John the Baptist. In the fourth Gospel, the Baptist recognizes and proclaims Jesus as the one who comes after him (John 1:26-34). In arriving at a final assessment of John the Baptist, we need to take into account all that is said about him in all four Gospels. But reading Mark's Gospel for the message it proclaims is a different matter. To do so we need to pay attention to what Mark says--and doesn't say-- and not automatically import information into Mark's Gospel from the other Gospels.

There is a second, related requirement. In reading Mark's Gospel we need to distinguish between what we know because Mark tells us and what the characters in Mark's Gospel know or do not know. Mark has told us that John the Baptist is the one sent to prepare the way for Jesus (1:1-3). But John the Baptist has not read Mark's Gospel and might not know what we know. Mark has told us from the very beginning that Jesus is the Christ (1:1), but those Jesus meets in the course of his ministry will be slow to recognize who Jesus is.

If John did not recognize Jesus, what does that tell us about the Baptist's call? Perhaps it tells us that God asked John to play a particular role but did not inform him of the full implications of his role. Something similar may well be true for many of us. We have been given certain responsibilities by God, perhaps even a clearly defined mission in life. But we may be in the dark about the ultimate outcome of our actions. We know what to do but not what it will accomplish in God's perspective.