All the Things I Didn't Know About Mother Teresa

Updated: scroll to the bottom for final remarks upon finishing the book. 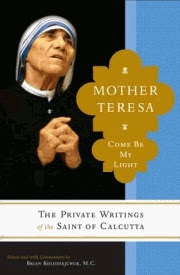 Mother Teresa: Come Be My Light
by Mother Teresa, Brian Kolodiejchuk
I am about two-thirds of the way through this book and have been surprised by how it has not matched my preconceptions. I put off beginning it because I expected it to be dreary and full of misery because of Mother Teresa's now well known "dark night of the soul." However, although the first half of the book alludes to that, most of it is about her early life as a nun, her struggles to set up the Missionaries of Charity, and her early days in Calcutta. Most stories I have read about her tend to gloss over those days in order to get to the flowering of her mission in Calcutta so this was a revelation. Also a revelation was the "inner Teresa" that is shown to us in her early letters.

I had no idea that from very early in her days as a nun Mother Teresa was known for her humility, joy, and for extraordinary sacrifice, even when it included going alone into the streets after religious rioting killed over 5,000 in order to find food for the school's students who had nothing to eat. What becomes obvious is her great love and devotion to Jesus and that she is being formed to be a great example to everyone.

I had no idea that her messages from Jesus to go serve the poor of India took the form of her actually being able to hear his voice. She had many recurring and various visions of Jesus, Mary, and the massed poor of India pleading with her to bring them to our Lord. It was the view of her confessor that she was in a state of "near ecstasy" during those times, which brings inevitably to mind St. Teresa of Avila.

It never occurred to me that Teresa would have been taken aback by this call to serve the poor. Perhaps because her mission has always been presented to me as a thing accomplished, I never knew or considered how much she loved her current life and thought she already was where God wanted her to be. This put me forcibly in mind of a conversation I recently had with a friend who passionately proclaimed that she felt herself being led to a place that was not what she had in mind for how her life "should go." The next day I read this passage and thought how real it made Mother Teresa to me, how she thought she knew God's call, and how shocked she was to find out what he really wanted ... which wasn't in her conception of God's will at all. Just as my friend was expressing. Just as many of us have doubtless experienced.

A moving exchange of great beauty went on between Christ and Mother Teresa. With utmost tenderness, He addressed her as "My own spouse" or "My own little one," "My Jesus" or "My own Jesus," replied Mother Teresa, longing to return love for love. In this sacred dialogue, Jesus was revealing His Heart to her: His pain, His love, His compassion, His thirst for those who suffer most. He also revealed His plan to send her to them as a carrier of His love. This revelation had a deep echo in her soul. Many years earlier, writing back home, she had expressed her desire "to bring joy to the lives" of those to whom she had been sent. She had prayed for "the strength to always be the light of their lives and so lead them to You!" However, he call to leave Loreto and be a sign of Christ's presence, a carrier of His love and compassion to the poorest of the poor in the slums, was not the kind of answer she expected in response to her prayer. Yet the "Voice" kept pleading, "Come, come, carry Me into the holes of the poor. Come, be My light." Jesus' invitation was imbued with trust; He counted on her response.

I never realized how Mother Teresa pestered and pestered ... and pestered her Archbishop to try to move things along quickly in being allowed to leave her current vocation and begin her new mission in India. I felt a real sympathy for Archbishop Perier who kept responding with measured requests for her not to be so "hasty" and to allow him time to evaluate, pray, and consider her calling. Of course, with Jesus himself speaking in your ear it is easy to see that one might keep up the pressure so we can easily see Teresa's side of things too. Her persistence, however, was one of the things that impressed him with Teresa's zeal and sincerity so that served its purpose also.

I never thought of Mother Teresa as a young novice, off on her mission to serve God. There is a delight for me in that 18-year-old girl whose openness and joy in beginning her vocation overflow from her letters home. She is so very like Hannah, Rose, and their friends whose enthusiasm and energy abound as they set off on their own missions and vocations to college and beyond. In hindsight, there is even more joy because her request to her family, "Pray much for us that we may be good and courageous missionaries" was answered so far beyond anything that she could have dreamed at the time.

I never realized that Mother Teresa was simply a person. Her letters are usually very simple and served to make me understand that "under her skin" was a person just like you or me. The big difference was that she was in love with Jesus had made a vow to give him "all." For an Albanian that vow, quite simply, was invested with cultural cement that would not break, as well as with all her considerable stubbornness and will. In reading this book, Mother Teresa has gone from an iconic figure to someone whose struggles I can relate to, albeit on a very simple level through my own understanding. She has become someone who I can attempt to emulate in her determination to give Jesus her "all."

I now can see that part of her "dark night of the soul," torture though it was to Teresa, also helped to insulate her against the adulation of the secular world as it became more aware of her mission. I am just beginning this part of the book so will undoubtedly learn more about Mother Teresa, this person who is now real to me, and who has many lessons to teach me about loving and following Jesus.

It also occurs to me that those critics, like the famous Christopher Hitchens, cannot have really read this book (or perhaps did not read it honestly without their own preconceptions) before accusing Mother Teresa of discovering that there is no God and not wanting to admit it to the world. Clearly through her letters, side by side with darkness and abandonment, goes a true love and longing for Christ to return to her. She did not doubt his existence in the depths of her soul, though surely she felt that way sometimes. However, she was too wise to succumb to acting on her feelings.

This also answers some of the comments I've heard from people who remark that they have never felt close to God and that must be a similar experience, albeit admittedly lesser than Teresa's. It makes me think of how facilely many of us leap to self comparisons with St. Jerome when we have a sharp retort simply because of his famous temper, without stopping to think of his many sacrifices, his accomplishments and his love for Jesus ... which I note none of us claim to match. Similarly, none of us have had the actual presence of Jesus as our company for months on end as Teresa did. Surely we would feel that darkness to be bottomless once we were bereft of it, just as she did. Just as surely we would look for answers from any spiritual advisers we had. Hopefully we would be able to do it with her "yes and a big smile," though in my own case ... I am doubtful I could achieve it.

By the way, this is a fairly quick read. I began it Monday night. Obviously it is highly recommended.

UPDATE:
I finished the book last night and was very surprised to find myself in tears through the last two chapters. Reading of Mother Teresa's ability to embrace and even find joy in her "darkness" as God's will and as a reparatory suffering offered for the souls of the poor ... well, it was a beautiful thing is all I can say. To read of her continual widening of her ministry to the poor in her final years was equally beautiful and also reminded me of the personal nature of salvation and the necessity of our ministry to those within our own circles, beginning with our own family and friends.

Do not think that reading the TIME magazine article is adequate for your understanding. Do yourself a favor and read the book itself. Accept no substitutes!
By Julie D. at October 18, 2007