Our Lady of Guadalupe and Symbolism 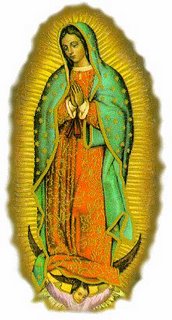 TSO mentions Our Lady of Guadalupe and says:

One of the interesting things about the image of Our Lady of Guadalupe is its teaching potential. Though she looks glorified, with stars and rays of sun coming from her as was predicted in Rev. 12, she is no goddess. Her hands are folded in supplication, her posture indicating that she is interceding for us at the throne of the God.

Indeed, he is right. There is so much in that image that speaks to Catholic hearts through symbolism.

However, there is much more to Our Lady of Guadalupe's image than that. As with all good Catholic images there is abundant symbolism that was specifically designed to speak to the hearts of the people to whom she brought her message ... the Aztecs. I remember when our priest put out a flyer about this and I was just knocked out at how meaningful every single thing in the image is. I really like this explanation.

The miraculous image produced on the apron or tilma of Blessed Juan Diego is rich in symbolism. The aureole or luminous light surrounding the Lady is reminiscent of the "woman clothed with the sun" of Rev. 12:1. The light is also a sign of the power of God who has sanctified and blessed the one who appears. The rays of the sun would also be recognized by the native people as a symbol of their highest god, Huitzilopochtli. Thus, the lady comes forth hiding but not extinguishing the power of the sun. She is now going to announce the God who is greater than their sun god.

The Lady is standing upon the moon. Again, the symbolism is that of the woman of Rev. 12:1 who has the "moon under her feet". The moon for the Meso-Americans was the god of the night. By standing on the moon, she shows that she is more powerful than the god of darkness. However, in Christian iconography the crescent moon under the Madonna's feet is usually a symbol of her perpetual virginity, and sometimes it can refer to her Immaculate Conception or Assumption.

The eyes of Our lady of Guadalupe are looking down with humility and compassion. This was a sign to the native people that she was not a god since in their iconography the gods stare straight ahead with their eyes wide open. We can only imagine how tenderly her eyes looked upon Blessed Juan Diego when she said: " Do not be troubled or weighed down with grief -- Am I not here who am your Mother?"

The angel supporting the Lady testifies to her royalty. To the Meso-American Indians only kings, queens and other dignitaries would be carried on the shoulders of someone. The angel is transporting the Lady to the people as a sign that a new age has come.

The mantle of the Lady is blue-green or turquoise. To the native people, this was the color of the gods and of royalty. It was also the color of the natural forces of life and fecundity. In Christian art, blue is symbolic of eternity and immortality. In Judaism, it was the color of the robe of the high priest. The limbus or gold border of her mantle is another sign of nobility.

The stars on the Lady's mantle shows that she comes from heaven. She comes as the Queen of Heaven but with the eyes of a humble and loving mother. The stars also are a sign of the supernatural character of the image. The research of Fr. Mario Rojas Sanchez and Dr. Juan Homero Hernandez Illescas of Mexico (published in 1983) shows that the stars on the Lady's mantle in the image are exactly as the stars of the winter solstice appeared before dawn on the morning of December 12, 1531.

The color of the Madonna's dress is rose or pale-red. Some have interpreted this as the color of dawn symbolizing the beginning of a new era. Others point to the red as a sign of martyrdom for the faith and divine love.

The gold-encircled cross brooch under the neck of the Lady's robe is a symbol of sanctity.

The girdle or bow around her waist is a sign of her virginity, but it also has several other meanings. The bow appears as a four-petaled flower. To the native Indians this was the nahui ollin, the flower of the sun, a symbol of plenitude. The cross-shaped flower was also connected with the cross-sticks which produce fire. For them, this was the symbol of fecundity and new life. The high position of the bow and the slight swelling of the abdomen show that the Lady is "with child". According to Dr. Carlos Fernandez Del Castillo, a leading Mexican obstetrician, the Lady appears almost ready to give birth with the infant head down resting vertically. This would further solidify her identification with the woman of Rev. 12 who is about to give birth.
Source