It's been 11 years since I began this series highlighting movies I wished more people knew about. I'm rerunning it from the beginning because I still think these are movies you might have missed.

So many strikes against wanting to watch this movie ... it is black and white, it is old, we "know" what it's about. But there is much more to it than that. 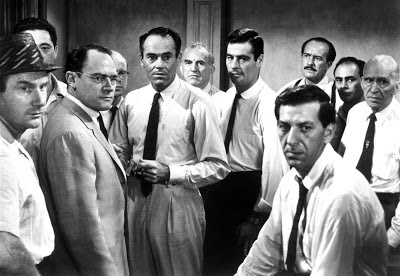 I've seen so many jokes and references made to this classic that I thought it was time to actually see the movie itself.

In brief, 12 Angry Men is the story of a lone juror (Henry Fonda) who has reasonable doubt of the guilt of the defendant in a murder case. Everyone else is positive that the defendant is guilty. The jury must be unanimous either way. Complicating matters are intense heat in a time of no air conditioning, a wide range of personalities, and various personal needs that seemingly overrule the needs of careful deliberation.

This was legendary director Sidney Lumet's first feature film and the talented cast included Henry Fonda, E. G. Marshall, Lee J. Cobb, Jack Klugman, and Jack Warden. They truly created a film that is still great over 50 years after it was made.

12 Angry Men is an illustration that the story is what drives a film. As the one dissenting "not guilty" juror (Henry Fonda) asks the questions he wished would have come up in the trial and thinks things through aloud, I was pulled into the case details myself. Likewise, as the other jurors comment we are given insight into this very diverse group of men.

It works on so many levels including, not intended I am sure, how very different twelve white men can be even though we have been trained by society to think of them as peas from a pod. We also see why we can't just accept what we are told, why individualism and working as a team both matter, and much more. I have been on several juries and seen some very similar situations arise.

On a side note, I also appreciate my air conditioner anew.

Although unintended on my part, it was also the perfect movie to watch on Memorial Day weekend as I wound up feeling proud to be an American. Who'd have thought that I would have felt that way about jury duty? Just one more reason the movie is a classic.
By Julie D. at March 02, 2021