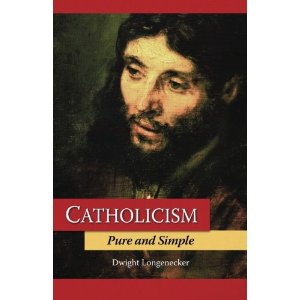 If a good person decides to fight against evil he will always be at a disadvantage. ...

The evil person will naturally use every devious and nasty trick he can think of. That's why he's bad: he is a liar, a cheat, a murderer and a thoroughgoing scoundrel.

However, the good person cannot use the same evil tricks. So the evil one will lie and scheme. He will punch below the belt and throw salt in the good guy's eyes. But the really good person is not allowed to lower himself to dirty tricks. Jesus taught us this principle. When our enemy slaps us we are told to turn the other cheek. When our enemy takes our coat we are to offer him our shirt as well.

This disadvantage that the good person suffers is the key that unlocks the whole mystery. You see, evil gets worse and worse in the world when we do not fight with goodness. We usually respond to suffering by causing more suffering. We seek revenge and return evil for evil.

When we do this evil breeds in the world and will never be defeated. This is why Jesus teaches us to return good for evil, to forgive our enemies, and pray for those who hurt us. Jesus is trying to get across to us that the only way for evil to be defeated is to smother it with goodness as water puts out a fire.

I've been a fan of Dwight Longencker's writing for a long time, definitely since before he became a Catholic priest. Catholicism Pure and Simple may prove to be my favorite of his books. For one thing, it is chock-full of passages like the one above, which helped me for the first time in my life really get a grasp of why Christ insists on the necessity of returning good for evil.

Overall Catholicism Pure and Simple is a basic explanation of the Catholic faith. It would be a great refresher for someone who wants to know their faith better, a good text for RCIA classes, or an introduction for those curious about what Catholicism teaches (rather than what "everyone" says it teaches). Following the general topic guidelines that the Catechism itself follows, Longenecker takes readers from why we believe God exists, through who Jesus Christ is, how the Catholic Church came to be, what it means to be Catholic and how to live the faith.

Although the explanations are basic, they are well developed and thought provoking. Catholicism Pure and Simple is a riveting read, written in straight forward terms, designed to take each person to an understanding Catholicism. I myself particularly liked the way Longenecker takes longstanding modern beliefs and stands them on their heads, encouraging us to look at what "everyone knows" with new eyes.

For example, what "everyone knows" is that religion evolved because cave men, afraid or impressed with thunder and lightning, concluded that a being lived in the clouds who needed to be appeased. From these beginnings came the development of religious worship. At least, that's the story that I always believed before becoming Catholic. Look at a bit of how Longenecker discusses it.


Did you notice how this argument makes certain assumptions about cave men? It treats the cave man as a noble savage. Because he feels a sense of wonder at the natural world he is portrayed as a ignorant, but touchingly sensitive brute; but have you seen the trick? Because he is a cave man we assume that he must be inferior to us; therefore his conclusion that there is a big person beyond the clouds who caused the thunder must also be primitive, and wrong.

Although cave men may not have been as educated as we are or have such whiz-bang technology, were they really so much stupider? ... We don't have evidence for that. Instead, when their graves are opened we find beautiful works of art and craftsmanship, and when we go into the cave itself we find mysterious and beautiful wall paintings. The evidence we have tells us that whoever painted those graceful bison and deer were not primitive brutes, but sensitive artists. ...

The caveman is being quite sensible, in his own way, to observe nature and see the signs of an unseen intelligence. Like most easy theories, this theory of where our religious instinct comes from is both right and wrong. It is right because it tells us that even primitive people can see the power of nature and conclude that there is a mind behind it all.

However, the theory is wrong in what it assumes. It assumes that because modern humans understand the physics of thunder, and have telescopes to study the stars, that they no longer have a need for God. ...

Catholicism Pure and Simple both delighted me with examples and inspired me overall by the pure and simple truth contained therein. I cannot recommend this book highly enough.
By Julie D. at January 09, 2013