From Alice Cooper to St. John Vianney to Battlestar Galactica ... and beyond: Announcing Happy Catholic - the book! 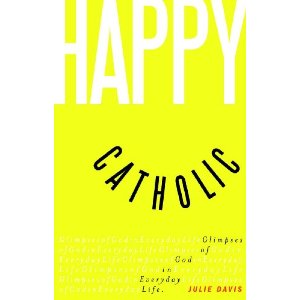 Why did it take me so long to see the truth that floods through everyday life? -- from the Introduction.

As she does in her blog, Happy Catholic, Julie Davis taps into quotes ranging from The Simpsons to John Paul II, Battlestar Galactica to Scripture and The Princess Bride and discovers all around her glimpses of God. Her reflections on pithy quotes (Trashing your hotel room is easy, but being a Christian--that's rebellion. -- Alice Cooper) draw back the veil, letting us connect with God in unexpected ways. Intriguing to both Christians and non-Christians alike, this book is also an unexpected source for daily prayer.

Can you believe it?

It takes one of the most popular features, the daily quotes, and combines that with my reflections on them. These are the sorts of thoughts that go through my head when I put the quotes in my journal and on the blog. I just don't usually share them.

I wrote all but a couple of these 149 reflections specifically for the book, most of them while sitting in front of the tabernacle in our Church. So if you especially like one or two of them, then you know who to thank for the inspiration. (Hint: it ain't me!)

Here's a sample that gets you from Alice Cooper to St. John Vianney.

Still Countercultural After All These Years

Drinking beer is easy. Trashing your hotel room is easy. But being a Christian, that’s a tough call. That’s rebellion.

If you care about what people think of you, then you should not have become a Catholic.

It is astounding that as far as we have advanced, there is still nothing more shocking to the world than a faithful Christian. Jesus was radical in his time. Following Christ makes us radicals in turn. We’re called on to slice through all those neat little boxes that people use to make things more understandable. There is no political party we can trust. There is no nation that gets it right. There is no cultural group where we are going to completely feel at home. We are the ultimate outsiders. That’s OK, really. If we’re doing it right, then we’re upsetting things because we won’t “settle” and we won’t conform. We answer to a higher power.

Take another look at that crucifix and remember the only really original rebel, the one whose watchword of “Love one another” casts the world into confusion. Then prepare to be fully yourselves in Christ and watch the confusion spread, along with the love.

Another excerpt: Knitting Madonna (actually this didn't make it into the book, but only because of space)

Pick it up from your favorite Catholic bookstore like Aquinas and More. It is also at Amazon.

Update
In response to a couple of questions I received in email ... we didn't design the book. The publisher (Servant Books) did all that.
By Julie D. at March 11, 2011

Email ThisBlogThis!Share to TwitterShare to FacebookShare to Pinterest
Labels: HC the Book