Reviewing "Roots of the Faith": Tracing Our Family Tree 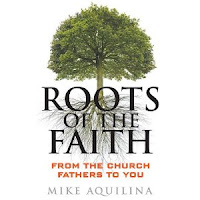 This review was first published in Pittsburgh Catholic.
One thing Catholics seem to be able to count on these days is criticism that our faith is a watered-down version of that practiced by early Christians. Protestants question the need for confession, the priesthood, and praying to the saints. Religious and secular alike protest Church teachings on abortion, marriage, and celibacy. We ourselves get caught up in questions about the authenticity of the Mass or the liturgy, as well as any or all of the above issues.

In "Roots of the Faith," Mike Aquilina comes forward with answers to these questions and more. He shows concrete evidence that our faith has vital roots in the 1st century Church. The long-ago seeds of current teachings and Traditions are traced into their current place in the modern Church. What makes this book especially useful is that Aquilina addresses eleven issues that are commonly encountered today, among them hot-button topics like abortion, celibacy, and the priesthood.

Aquilina has long been known for his books about the early Church Fathers*. This is his most relevant book to everyday faith. It is an invaluable source for anyone who wants assurance that, "Nothing essential has been added, and nothing essential has been lost." Not content to merely answer questions that we may encounter daily, he ranges much further to make sure there is adequate context to fully understand each topic. The end result often is surprising new information, such as this tidbit about the Bible.


From the beginning Christians held certain documents as authoritative. Yet even these did not circulate as a book. Local churches possessed whatever document they had the cash and the opportunity to pull together. A bishop might own one or two of the Gospels and some of the letter of St. Paul. Only the most fortunate churches could possess most of the books we now know as the Old Testament and the New Testament.

Not only does a passage like this help to get the historic context of the development of the Bible, but it encourages us to travel in imagination to a time when the only Mass readings might be from Mark and 1st Corinthians, because those were the only books their church could afford. Thus the similarities and differences between that ancient time and our own are deftly revealed. More importantly, Aquilina makes sure the reader understands all the implications of the ancient pagan beliefs at the beginning of the Church and the impact they had on Christians. Quite often, this provides valuable background for any conversations readers may have on current issues, such as we see with the excerpt below about abortion.


Pagan philosophers would have been inclined to agree with today's abortion protesters: Abortion is baby-killing. The difference is that that pagan philosophers didn't see anything wrong with killing babies. Infanticide was a common and well-accepted practice in the pagan world. Romans didn't always kill their babies directly; more often they "exposed" them, meaning that they threw them out on the trash heap to die of starvation and exposure. Girl babies, of course, were especially disposable. Many a Christian woman grew from one of those exposed babies whom some passing Christian discovered and rescued.

Most impressive of all is when Aquilina clarifies points about the Church Fathers' writings which are typically used by detractors as proof against current Church teachings. For example, St. John Chrysostom's writings about marriage allow one to view him as either stereotypically prudish or surprisingly modern. Aquilina plainly takes us through Chrysostom's personal growth demonstrating how experience as a parish priest brought a more realistic view of marriage that was unique for the time. This can be difficult to do but Aquilina does it with ease.

The book is written in a conversational tone that makes for easy reading. Readers will particularly appreciate that Church Fathers' writings are in a modern translation and simple to understand. It is hard to imagine a better book to help understand and defend the teachings of the Catholic Church. Hopefully Mike Aquilina will be moved to write likewise on other contentious questions which are raised for modern Catholics. We could use the help.

*The Church Fathers were holy Christian theologians whose teachings and doctrine set precedents for the Church. They wrote during the first seven centuries.
By Julie D. at October 13, 2010