Reviewing The Reapers are the Angels: Zombies Are the Least of Her Worries 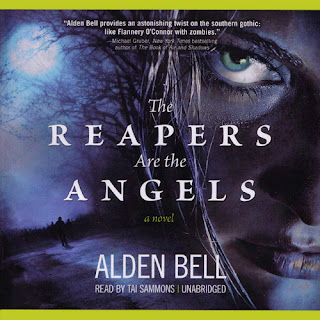 God is a slick god. Temple knows. She knows because of all the crackerjack miracles still to be seen on this ruined globe.

Like those fish all disco-lit in the shallows. That was something, a marvel with no compare that she's been witness to. It was deep night when she saw it, but the moon was so bright it cast hard shadows everywhere on the island. So bright it was almost brighter than daytime because she could see things clearer, as if the sun were criminal to the truth, as if her eyes were eyes of night. She left the lighthouse and went down to the beach to look at the moon pure and straight, and she stood in the shallows and let her feet sink into the sand as the patter-waves tickled her ankles. And that's when she saw it, a school of tiny fish, all darting around like marbles in a chalk circle, and they were lit up electric, mostly silver but some gold and pink too. They came and danced around her ankles, and she could feel their little electric fish bodies, and it was like she was standing under the moon and in the moon at the same time. And that was something she hadn't seen before. A decade and a half, thereabouts, roaming the planet earth, and she's never seen that before.

And you could say the world has gone to black damnation, and you could say the children of Cain are holding sway over the good and the righteous—but here's what Temple knows: She knows that whatever hell the world went to, and whatever evil she's perpetrated her own self, and whatever series of cursed misfortunes brought her down here to this island to be harbored away from the order of mankind, well, all those things are what put her there that night to stand amid the Daylight Moon and the Miracle of the Fish—which she wouldn't of got to see otherwise.

See, God is a slick god. He makes it so you don't miss out on nothing you're supposed to witness firsthand.

I actually asked to review this book because I'd seen it described as a "twist on the southern gothic: like Flannery O'Connor with zombies." As someone who has just begun to appreciate Flannery O'Connor's writing this hit me like a challenge. However, as I listened to the first chapter, I was struck by the unexpected beauty of the writing and themes that many people wouldn't attempt, especially in a zombie book. This unexpected beginning was merely the first of the many surprises that Alden Bell had for me in The Reapers are the Angels.

Temple is a fifteen year old girl who was born ten years after the zombie apocalypse happened. No attempt is made to understand or solve the zombie problem. No government has been formed from the survivors. It is a world with pockets of survivors who set up such systems as seem good to them individually. Chaos rules. Temple has never known a world where zombies were not part of the landscape and this gives us a unique perspective into the apocalyptic novel. It is the world of the survivors where the zombies are a danger but not a shock.

Temple is a fearless drifter, moving from place to place to see wonders or carry out such tasks as she feels she has been given to perform. One such task is when she comes across a severely retarded man in a poignant scene where he is running from zombies with his dead grandmother in his arms. She takes on the task of getting the man, who she calls "Dummy" until she learns his name (Maury), to a safe place where he will be looked after. A wealth of information is conveyed in that name, "Dummy." This is a world where being politically correct doesn't matter, where truth can sound hard but be kind. Temple is matter-of-fact because that is the only coin that counts in a world of zombies roaming wild.

Early in Temple's travels she encounters the man who becomes her nemesis. Interestingly enough, they understand each other better than any other people on earth, although they are at odds. Both are "God-haunted," both recognize the truth and resolve it takes to "stay right." He wants to kill Temple and she understands why, but nevertheless is not going to let him succeed. She is also afraid of something evil within herself which keeps her on the move. In the process of evading her relentless pursuer and caring for her protoge, Temple roams across the South, encountering a wide variety of wanderers and societies. Some are clinging to hopes of returning to normalcy, some accept the new way of the world but refuse to understand it for what it is. Many people encountered are kind and a surprising number of them are also traveling despite the uncertain times. All are shown through Temple's honest gaze which even can understand and accept the zombies as long as she isn't being attacked.

This doesn't mean that Temple is only pragmatic, however. She is weighed down with grief from past actions, which we gradually discover in the course of the novel. She feels joy and wonderment at events such as the fish in the excerpt above and her overriding desire is to see Niagara Falls some day. As she chatters to the largely speechless Maury we see the natural personality of a 15-year-old girl emerge every so often.

I have never read a book with this perspective. I love a good apocalypse story, watching the survivors get over the shock or succumb depending on their natures, watching the alternative governments set up, watching the various ways that everyone attempts to restore the most important aspects of the status quo. This book has no such moments. The world already has "gone to black damnation" but even so there are moments of beauty, meditation on what is right, suspense over what Temple will find in each town, whether she can get Maury to safety, how she will finally elude the determined killer on her trail, and what the evil is that she feels is deep within her. I rarely have listened to a book with such intensity or found myself surprised as often by the lyrical, fluid writing.

Tai Sammons narrates this book with restrained clarity. She has the ability to seamlessly shift into accents from upper class to hardscrabble Southerner while taking on the characters so that the listener tends to forget that there is just one person reading. She does this without altering her voice much either which is a rare skill and one that enhanced the book greatly. In fact, after I found out that the print version does not have quotation marks used for dialogue, I realized that in listening to Sammons' narration I was enjoying this book in probably the best format for easy understanding. (This experience made me reconsider reading The Road by Cormac McCarthy who is known for both excellent stories and also for the difficulty of reading his prose. I will be seeking out the audio version.)

As with the best science fiction or fantasy, ultimately this story is about much larger issues than hordes of wandering zombies, who have the least presence of any monsters I've ever read about. There is blood aplenty, make no mistake, but zombies are far less dangerous that what lies within Temple and her pursuer. The book is not perfect. Some of the plot details are immediately obvious although they take Temple a long time to figure out, which can be a bit frustrating to the reader. However, overall the book packs its equal share of surprises in plot which more than compensate for the failures.

The Reapers Are the Angels looks at the pursuit of beauty, the pursuit of God, the flight from inner demons, and the fact that none of us can ever see the whole truth at any time. We are too small and truth is woven too large. It isn't Flannery O'Connor but it doesn't need to be to accomplish the same thing that O'Connor always wrote about. The Reapers Are the Angels is a book about being human with all the questions and struggles that humans have had throughout time. Highest recommendation.

Reader's Note: I would rate this "R" for zombie and human violence, some sex though it is not graphically described, and occasional apocalyptic despair.

This review is cross-posted at SFFaudio, who provided the review copy of this audiobook from Blackstone Audio and at Catholic Media Review.
By Julie D. at October 20, 2010