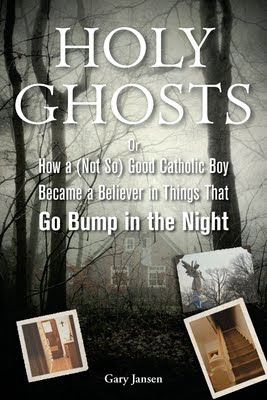 What many of the faithful thought was lost after these reforms [the Second Vatican Council, 1962-65] was a sense of the supernatural--of an unseen, invisible world, the world of spirit. This is not to say that spiritual matters were abandoned. Far from it, but as the Church shifted its focus in the latter years of the twentieth century, did belief in angelic and demonic forces have a place in the modern world any more? Did miracles really happen or could science explain them away? Or, for that matter, was heaven a real place or a state of mind? As these issues were debated over the next few decades, the idea of a spirit world for many people began to lose power. And, many critics believed, so did God.

In a sense, this is the true heart of Holy Ghosts by Gary Jansen. While on the surface it is the story of a decades-long haunting, underneath Jansen begins wondering whatever happened to what everyone used to "know" about the supernatural world existing alongside our own tangible one.

Jansen begins as a hard-headed skeptic who was trained in ignoring the odd noises and quirks of his childhood home. Doorbells that rang with no one there, the sound of smashing glass in the middle of the living room where there was no glass to be smashed, and creaking stairs that sounded as if someone were walking on them when no one was there ... these were all standard occurences as he grew up; as the family gave reasonable explanations, he accepted them and learned to do likewise. However, when he is living in that same house as a married man with a child, the oddities grow worse and eventually neither Jansen nor his wife can ignore them any more.


The lamp was off in the toy room, which was just beyond our dining room, but there was a soft blue glow from the computer screen illuminating the wall I stood up and slowly walked across the floor, and the church bells had been replaced by the sound of drums. And it was getting louder. I stepped inside the toy room, where there was music coming out of the speakers. iTunes was on, and metallic guitars were pumping to the beat. It took me a brief moment, but the song registered in my head. It was "Hells Bells" by AC/DC. I remembered leaving the computer on before I stared reading but I was positive there wasn't any music playing. The vocals kicked in and, as I stood there listening to the sound, I felt the electric surge that I had mostly only felt in Eddie's room roll over me as lead singer Brian Johnson intoned, "I'll give you black sensations up and down your spine. If you're into evil then you're a friend of mine."

"You've got to be s******g me," I said to myself. "There is no way this is happening." I switched off iTunes, shut down the computer, waked upstairs, and got into bed with Grace. Eddie was sleeping soundly next to her. I put my arm over the both of them and, for the first time since all of this began, I felt afraid.

There are more things revealed in that house than are dreamt of in their philosophy, until Jansen begins wondering what the Catholic Church teaches about angels, demons, ghosts, and spirits. He is surprised to learn that the Church takes these things seriously and does not treat them as products of imagination. As we watch Jansen strive to understand and rid his home of the often terrifying ghosts, we also travel with him on the journey of discovering what it means to acknowledge the unseen world of the supernatural.

I truly enjoyed this book, although I used very bad judgment in reading it before bedtime. I don't think it would have bothered me as much as it did, except for the fact that I have had two experiences with ghosts or spirits myself. This confirms one of Jansen's comments on the accompanying publicity materials, which is that it is very common for him to share his story only to have the listener pipe up with an experience of their own. Like synesthesia, this is something that people rarely speak of, but may experience a lot more than we are led to understand. Reading this made me think of my own experiences again and that was an uncomfortable thing indeed.

Jansen offers his story with no apologies for taking a rather unorthodox route in dealing with the problem. He lets us see his indecision, his questions, and the reason he ultimately chooses the path they took. A more orthodox Catholic, what Jansen might call a "good Catholic" probably would have gone to a priest at some point and asked for a rite of exorcism or some other sort of aid. It is difficult to say what one would do in such a situation until one is faced with it. Theories are very fine until one imagines facing a priest and talking about ghosts. So much depends on the personalities of the people and their preconceptions (yes, even priests have preconceptions.) I think that Jansen made the best decisions he could with the information he had at the time and, ultimately, that is what we all do when dealing with crisis situations, for better or worse. (For those who have come to me with "pastoral concerns": I don't advise taking Gary's route and would have gone to my local priest or some other Church official who would have done an exorcism or whatever was called for.)

My only quibble with the book is that occasionally Jansen uses language which, frankly, surprised me not so much because it was just this side of swearing, but because it felt at odds with the rest of the flow of the book. It was as if he were trying to push for "edgy" language, but honestly that was not needed. The story itself, told in all honesty, is edgy enough without those lapses which always took me out of the book and stopped me for a second before I would plunge back in.

Jansen's honest tale is one that I highly recommend. What I appreciate most is the way that he used his supernatural encounters as a springboard to look for what the Catholic faith teaches and for a way to incorporate it into his everyday life. This is how Catholics should live, no matter what we encounter, and Jansen gives us a fine example of it. As he points out, the Church is reacquainting us with some of the things that were inadvertently ignored or misplaced in the reforms after the Second Vatican Council. If we believe in God, then the Bible has much more to say about other supernatural beings. It is something worth pondering and Holy Ghosts is a well told tale that is a good reminder of those truths.
By Julie D. at August 31, 2010