I'm rereading this book which has inadvertently turned into Advent reading. I'd forgotten just how good it is — inspirational, informative, and, above all, a wonderful reminder of a great pope and saint. I originally read it in 2006. My original review is below.

(I have added an update upon my rereading which is in italics at the bottom.) 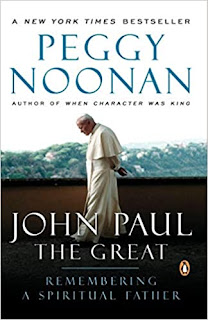 Why did so many love John Paul II? If you read this book you will know why.

Peggy Noonan writes with conviction, force and clarity about her own love and respect for John Paul II as our spiritual father. In so doing, she gives us the essence of this great pope's life and faith as distilled through the lens of her own growing return to her Catholic faith and love of God.

I only really paid attention to him after I converted in 2000 so my own experience with JPII was of him as the old pope who showed us how to live, love, and give through suffering. In fact, I was aware of respecting him but didn't realize my own great love until I read the false report of his death (a day before the actual event) on the Drudge Report. I mystified myself by bursting into great, body-shaking sobs that wouldn't stop. When I went into Tom's office, he was alarmed and, after hearing an explanation, he shook his head at me. "You love him," he said, "You just didn't know how much until now."

Perhaps that is why I am finding myself pulled through this book at breakneck speed. I knew the bare bones of many of John Paul's experiences as pope but this book is something like a Weigel-lite (?) biography in some ways. I am learning much about the details of his papacy even as I am brought to tears or smiles again and again by both his experiences as well as Noonan's.

I picked up this book from the library yesterday and am about halfway through. Already, I have begun to push it on others. An email here, a strong recommendation to someone there (such as to my husband who never reads "religious" books but is interested in this one).

Part of the fascination for me is Noonan's transparent honesty. She is, in a sense, every modern person who has struggled with belief, honesty, and faith itself. As she intersperses her tale with that of John Paul II, I find myself in agreement with her along the way. Her path is not exactly mine but her sentiments and struggles echo them well enough to resonate. And the resonation already is calling me to reach further in prayer...

So I was thinking about pebbles — the pebbles on the cover of the videotape, the pebbles in the Kevin Orlin Johnson book, the pebbles I saw on Jones Beach when I went out that summer to see friends.

I thought a lot.

I just didn't say any Rosaries.

I find this to be true of my spiritual life, and maybe it applies to yours as well: I think about things more than I do them; I ponder what seems their goodness more than I perform them. As if my thought alone were enough. But a thought alone isn't quite enough; it's an impulse and not a commitment, a passing thing that doesn't take root unless you plant it and make it grow.

So I just thought about all this. And was very glad other people were saying Rosaries, and when I met them, I always asked that they pray for me.

Meanwhile, the problems I was having were growing more urgent. And I would talk to God about them. But I didn't say the Rosary.

And then I believe I was told to do it.

How was she told? Well, for that I encourage you to read the book (I'm not above dangling a tasty carrot). The problem Noonan details is a problem I have myself. It is so easy to think about something rather than to do it. However, through this passage (and the miracle that follows) John Paul II is reaching me through this book and calling me back to the rosary which I began saying again this morning on my way to work. It was once a steady habit, but fallen by the wayside somehow as things sometimes do.

Perhaps it also helps that Noonan was heavily influenced by Kevin Orlin Johnson's book Rosary, which also pulled me into the rosary soon after my conversion. I have never known anyone else who read it and so that helped get my attention. (Off topic is a question I always have meant to ask: does anyone else have this book and, if so, does their book smell of roses? I assume they somehow put the scent in the paper which is a nice touch but always wondered as I never could find any reference to it in the book credits.) [Update - it turns out no one else has had this experience except my family.]

Noonan also references others who have perspective and personal experiences such as George Wiegel, Michael Novak, Richard Neuhaus, and even actor Jim Caviezel who portrayed Jesus in The Passion of the Christ. The snippets that she quotes have made me interested in reading more indepth about John Paul II.

Go find this book and read it now!

UPDATE (part of the original review)

I have now finished the book and it holds up right through the end. To her credit, Noonan does not skirt the places where John Paul II was not perfect and which contributed to such problems in the American church as a "cardboard" Mass or the sex scandals. She examines the problems and the various degrees of blame which could be attributed to the areas where John Paul's lacked in leadership. I found especially interesting her theory of why the pope was so deficient in handling the sex scandal problem. It was a theory that I hadn't heard and one that some may say is too kind, however, I think it possibly is quite right.

However, this does not diminish his great overall achievements both for Noonan (and many, many others personally) and for the Church as a whole. The book ends on a note of JPII's legacy to Benedict XVI. I will leave it to you to see Noonan's nickname for Pope Benedict which I hadn't heard before but is so apt that I laughed with delight when I read it. Again, this book cannot be more highly recommended.

In the chapter "The Great Shame" where Noonan talks about John Paul's failings, in particular the sex scandal, she recounts being asked to speak at a meeting of Catholic conservatives held by Cardinal McCarrick and Bishop Gregory. Over a decade after the original meeting, with the knowledge of Cardinal McCarrick's true nature and behavior now revealed, it was chilling to read about his reassuring nods and kind smiles to some of her most heartfelt points about the victims and the Church. More than anything it reminded me of how well he masqueraded, as good predators do, as an understanding, caring person who is to be trusted.