t's been 10 years since I began this series highlighting movies I wished more people knew about. I'm rerunning it from the beginning because I still think these are movies you might have missed. 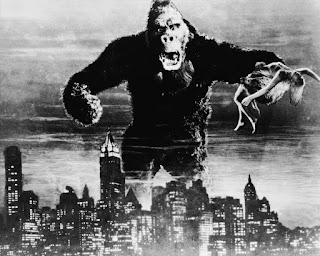 Reject all imitations. The original King Kong is one of my all-time favorite movies and a true classic in its own right.

It is a simple story: intrepid filmmaker, Carl Denham, leads an expedition to Skull Island where they discover a 50-foot gorilla who becomes enamored of Ann Darrow (Fay Wray). He is captured and brought back to New York City as the "8th wonder of the world" where he inevitably runs wild with Ann clutched in one hand and meets his death atop the Empire State Building.

The skill of the movie makers is such that it is still thoroughly enjoyable almost 90 years later. Fay Wray has a scream that could stop a freight train; you could hear it over practically anything that the movie threw at it. The animation was star quality at the time and you soon discover that it is not the animation but the story that carries a movie. (My review is here.)
By Julie D. at May 18, 2020