A Movie You Might Have Missed #13: Bullets Over Broadway 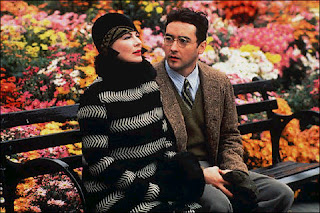 A struggling playwright (John Cusak) is forced to cast a gangster's moll in the star part of his play in order to get it produced in the Roaring 20's New York. The moll is talentless and the playwright soon discovers that one of her assigned bodyguards has more writing talent than he does. Cusak's character soon falls for an aging diva whose attentions just add to the confusion.

A light, slapstick piece, this is one of Woody Allen's best films, perhaps because he isn't in it. It also raises good questions about the artist's debt to the creative muse and the price one pays to create.
By Julie D. at June 25, 2020