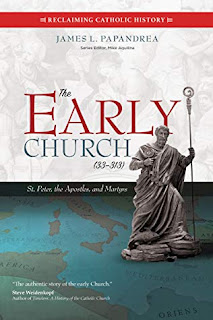 The first three centuries of the Christian faith were a period of missionary zeal, deep thought, and tribulation. In The Early Church (33–313): St. Peter, the Apostles, and Martyrs, Catholic historian and biblical expert James Papandrea dispels what he calls common “mythconceptions” about the early years of Christianity. Tracking the challenges of heresy and persecution throughout the period, Papandrea shines a spotlight on the earliest saints and explores the growth and development of the new Church.

I wasn't sure if I'd like this book as much as the next in the series, which I read first, by a different author. But I shouldn't have worried. This book is just as chock full of truthful Catholic history that's easy to read and that busts some of the ubiquitous myths about Catholicism. Even though I've read a fair amount about these early Church days, I still found new information. I especially appreciated that it was never assumed we knew basic information. This ranged from explaining the difference between numbering in plain years versus by century (the year 300 is the beginning of the fourth century) to outlining how the Church hierarchy came about.

Occasional "Up Close and Personal" boxes showcase different personalities or aspects of Christianity from that time, such as looking at the real Saint Valentine. "You Be the Judge" boxes examine common questions and set the record straight on topics like "Weren't Christian holidays originally pagan holidays?" or "Didn't the Church silence the voices of people who didn't follow the dominant party line?"