Have Mercy on Me Now and at the Hour of My Death. Amen.

I was "assigned" Captain Daniel O'Callaghan when Project 2,996 began. What an honor it has been every year to be allowed to bring this tribute of a fine American hero to everyone.


It has been a real privilege to read through the tributes of those who knew Daniel O'Callaghan and to learn about his life. Gradually this man I never heard of before has taken on real personality to me. Part of a large Irish clan, he was full of energy, loved children, loved joking around, and loved his family and job. In short, he loved life and made it better for everyone who was lucky enough to meet him.


When I was growing up, even though we didn't see the O'Callaghan's very much, it was always something to look forward to. We always had fun, laughter, jokes, & stories to tell. It didn't matter how long it had been since you'd seen each other, everyone was part of a big happy, loving family that hung together. Friends or family, it didn't matter; you were one of the family. It was wonderful.

I, myself, love the heart of someone who relished his job so ... and you've gotta love the image of those glow-in-the-dark boxers.


Though he came from a family chock-full of police officers - including six active officers and eight retired from forces in New York City and on Long Island - O'Callaghan, 42, switched to the fire department 18 years ago, after three years as a cop.

He was "born to be a fireman," said his friend and fellow firefighter, Paul Pfeifer.

His brother firefighters marveled at the constant energy displayed by "Danny O.," as he was known. "He was a ball of fire," said Pfeifer. In the engine house, he recalled, O'Callaghan "would have his pants and boots on already, like he was waiting for the next fire." And, Pfeifer said, at a fire scene, "You would turn around to see where he was, and he was already ahead of you."

O'Callaghan was also the one to provide comic relief when it was most needed. Pfeifer chuckled as he recounted one instance involving O'Callaghan and his glow-in- the-dark boxer shorts.

"We'd had a fire early in the evening that really beat the hell out of us," Pfeifer said. Most of the men were resting in the darkened bunk room, but not O'Callaghan, who never slept on the job.

"All of a sudden, he ran into the bunk room, and all you could see was the boxer shorts, jumping from bed to bed, and all you could hear was him laughing, and then he went out the door," Pfeifer said. "Everyone sat there, and was like, 'What was that?' I just said, 'That was Danny O.'"

That energy was one of Daniel O'Callaghan's main characteristics. It was mentioned time and again by all who knew him.


"Outstanding" This was always Danny's response...When I look back on it now though I realize it was his energy. It was his energy towards the two things he loved the most. His first would be his love for his beautiful family of Rhonda, Rhiannon and Connor. The other would be his other family. Being part of the NYFD. We should all be so lucky to have a loving family they we leave at home to join another that we work with.

It was his energy that could always be counted on when asked to assist in a family project or loan a hand in a task at ones home. Energy when telling a story or joke and always lighting up the place with his presence. His laugh was always robust and full of life...

I was especially impressed by the fact that although his shift was over, he turned back to help in the emerging disaster that was September 11, 2001. That is just the kind of guy that he was. Born to be a firefighter, from a family with a history of public service.


The motto of the station, which is located in the Broadway area, is inscribed on the fire engine and fittingly reads: "The Pride of Manhattan. Never missed a performance."

Maureen O'Callaghan was told her brother's shaving cream and clothes were found inside the station's bathroom, as he must have hurried to New York's aid with only half his face shaved, she said.

Anybody who lived life to the full the way that Daniel O'Callaghan did would also live his faith just as large.


"Much later, Anderson said, 'officials were able to identify Danny's remains in part by the Knights of Columbus rosary they found still firmly clenched in his hand.'"

I think of him and feel that he had to be saying the rosary or at least thinking it in those final moments with the beads firmly in hand. I remember a friend told me that she read somewhere about someone who is devoted to Mary. That when they who stand before God for judgment they will see Mary come forward and tell Jesus, "This is one of mine" as she puts her arm around that person. Surely, from what I have read of Captain Daniel O'Callaghan's life he had no need of Mary coming forward but just as surely I feel that she was there with Jesus to greet him as he entered heaven.

I feel that I got to know Captain O'Callaghan just a bit as I searched for pieces of his life to show others. In fact, I have gotten into the habit of turning to him for intercession when in prayer. I look forward to meeting this loving, energetic, Irish firefighter if I make it to heaven myself. In fact, I'm asking him to help me get there.

My heart goes out to his family, especially his wife and young children. If I feel this way after simply reading about him then surely they must miss him sorely. My prayers are with them. 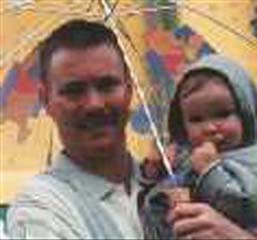 Sources:
Daniel O'Callaghan was just one of the 2,996 victims of the September 11, 2001, attacks on the World Trade Center and Pentagon, as well as the attempted hijacking of Flight 93. They are all mourned and missed. We will never forget.

2,996 volunteer bloggers
are joined together in a tribute to the victims of 9/11.
Each person is paying tribute to a single victim.

Email ThisBlogThis!Share to TwitterShare to FacebookShare to Pinterest
Labels: 9/11, September 11