I originally wrote this for my Free Mind column at Patheos. It is still posted there.

Two days after 9/11, my father-in-law had a massive stroke. My husband and I drove from Dallas to the hospital in Houston. Largely in shock between the double burden of terrorist attacks and personal tragedy, we were nevertheless stirred with pride at the many flags and hand-made signs we saw along the road. Tears sprang to my eyes when we passed a battered pick-up truck complete with obligatory shotgun rack and "We are all New Yorkers today" written on the rear window.

My husband said, "Those terrorists don't know what they have done. This guy would've spit on a New Yorker last week. And now he'd fight for them."

We were lucky. We didn't know anyone, then, who had died or been in the attacks. But we still suffered with the rest of the nation. It changed us as a people and as individuals.

It taught me a big lesson in forgiveness; as I expressed my forceful wish to see the people behind this attack "killed," a gentle friend from our parish looked at me with a troubled face. "I don't know," she said slowly. "But that doesn't seem right either."

I was taken aback and began to pray, even as I expressed anger. Gradually, the anger faded and the ability to forgive crept in.

Today, I mourn the 9/11 attacks as much as ever. Easy tears still spring to my eyes when I look over the old pictures, video footage, and exchange "what I was doing when I heard" stories with others.

I also think about the opportunity that we had to go forward as a people united—to bring something good out of the evil. We are more divided than ever, and ruder than ever. We squabble and complain about the red states, the blue states, the liberals, the conservatives, the Muslims, the Catholics, and on and on it goes.

Some of this is basic human nature, as old as the stories in Genesis, of brother striking brother. It seems to me, though, that some of it is Evil pushing its way into the world, and we are failing to push back for the common good. We listen to the siren call of "my way," which goes hand in hand with pride. 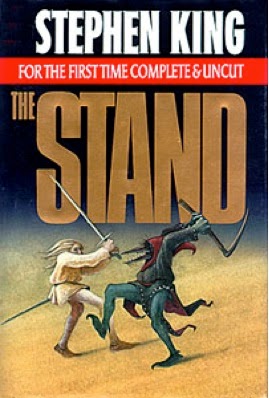 As always, when it comes to thinking things through, I find that others have pondered the matter so much more thoroughly than I could. Recently I picked up one of my favorite "good versus evil" books and found the words defining my thoughts.

Twenty-three years before 9/11, Stephen King published one of his best-known and best-loved books, The Stand. It tells a tale of the United States, laid to waste when a biological weapons-grade virus inadvertently gets loose. As survivors roam the post-apocalyptic ruins, they begin to have dreams about an incredibly old holy woman, named Mother Abigail, or of a supernatural entity—Randall Flagg—who is her opponent.

Following their dreams, two communities begin to form—Mother Abigail's in Boulder and Flagg's in Las Vegas—and the stage is set for a final "stand" between Evil and God.

King has expressed frustration that so many fans call The Stand their favorite work, even though he has written scores of books since its publication.

Well, it's a heck of a book for one thing, so it's no wonder people love it. And although this is a horror novel, it is very translatable to our own lives. We no longer worry about bio-terrorism the way we did back then, but we can still relate to the scenario King paints.

In The Stand, King holds up the mirror to us. God and evil are present, of course, but they work through men, as ever, and we recognize ourselves in the pages.

Harold Emery Lauder was the quintessential misunderstood nerd, picked on in school, crossed in love, and finding power in hatred. His note could have been written by any of the terrorists who flew those planes into the World Trade Center. I imagine that, like Harold, their betrayal of innocents was the culmination of a long trail of choosing their own desires first. King shows us enough of Harold's choices—sometimes made despite the screaming of his own instincts—so that we can see a little of him in every selfish choice we make.

Harold's end is not a good one, and it is made pitiful by the fact that he is tossed aside like a worn out doll when evil is done using him for its own purposes. We cannot hold onto our anger at him because he has been misled so completely. In a similar way, when I think of those terrorists and their deliberate evil, I have a bit of that pity for them as well.

Once they were somebody's babies. I don't know what led them astray, but I lament the loss of the people they could have been.


"You ain't no nice guy!" she cried at him as he went into the living room. "I only went with you because I thought you were a nice guy" . . . A memory circuit clicked open and he heard Wayne Stuckey saying, "There's something in you that's like biting on tinfoil."

After the plague, Larry is haunted by those words, "you ain't no nice guy"—they jump to mind whenever he contemplates a selfish or cowardly act. Ultimately, he actually becomes a "nice guy" by consistently choosing the nobler act, if only to prove those words wrong.

Larry is no different than you or me, or anyone who can see themselves with a modicum of self awareness. None of us are "nice guys" deep down because we are all stained with Original Sin. And we know it.

We have help, though, that Stephen King didn't give Larry Underwood. We have the grace of Christ, the sacrament of reconciliation, and our faith to strengthen us. Like Larry, though, we have to keep picking ourselves up and trying again. We must practice until we are more perfectly "nice guys."

9/11 has presented us with a chance to practice forgiveness over and over again. We're all in this together and lifting our thoughts (or hands) in hatred belittles us and our targets. We are Christ’s followers, charged to see Him in everyone they meet. We all have the same choice. Do we embrace Harold's way, or Larry's?


There's always a choice. That's God's way, always will be. Your will is still free. Do as you will. There's no set of leg-irons on you. But . . . this is what God wants of you.

Email ThisBlogThis!Share to TwitterShare to FacebookShare to Pinterest
Labels: 9/11, Patheos, September 11, The Stand