Book Talk: Jane Austen and Me

NORTHANGER ABBEY.
It began with Northanger Abbey. I'm considering reading this on my podcast so I reread it after having done so many years ago.

(And then Jesse from SFFaudio asked if I wanted to discuss it in November. Hey, I can tell when a book is haunting me.)

I know this was an early work and also that it is not as polished or accomplished as Austen's later books. That being said, I am still very fond of this parody of Gothic literature which reminds us that novels are no substitute for experiencing life itself. And it consistently cracks me up. I'm also very fond of P.G. Wodehouse and this book almost falls into that category for me. It doesn't have to be deep to be enjoyable.

And, let's face it. I always go for funny and light when I'm given a choice. Thus are my foibles and sins easily revealed.

SENSE AND SENSIBILITY.
I realized that I'd only read Austen's Pride and Prejudice and Northanger Abbey.

And none of her other books. No, I have no pride at all as a reader. In case you needed more than this as proof.

Plus, didn't you know Jane Austen is kind of boring and that if you've read Pride and Prejudice that you've skimmed the cream of the crop?

Well, maybe not. So I took steps to correct that oversight, beginning with this book.

It took me a while to pick up on what she was doing but I thoroughly enjoyed all the examples of "sense" and "sensibility" that Jane Austen thrusts at us from every direction. It made me appreciate the author's sly wit all the more as I took them in.

Also, I defy anyone reading this book to think that Jane Austen didn't understand the realities of life and only wrote milk-and-water novels. The string of ill-used women whose stories we are told by Col. Braden is realistic in the extreme, to say nothing of the revelations about Mr. Willoughby. The fact that Elinor took it all in stride also informs us about "what everybody knew" back in those days.

I myself was riveted by the romantic stories as well. Would love prevail in the way that seems most likely? Or would there be yet another plot twist to throw us into confusion? I finished this at breakneck speed.

There was a bit of "a shot rang out and everyone fell dead" in the sudden settling of everyone's situations, but all in all, a very satisfactory book which I know I will reread with much pleasure in the years to come.

A Jane Austen Education: How Six Novels Taught Me About Love, Friendship, and the Things That Really Matter by William Deresiewicz
Whoops! Where did this come from?

I was noodling around in the Kindle "recommended for you" section when I was partly through with Sense and Sensibility.

I like the way it is his memoir of learning how to grow up, with Austen as his guide, and also of how to read novels other than his favorite modernist authors. His self discovery is a nice way to let us in on the larger themes that can be easy to miss in Austen's mannerly comedies.

Also, his comments about Northanger Abbey made me stop apologizing for liking it so much. Turns out it isn't quite as lightweight as everyone likes to say it is.

I'm having to read it in fits and starts because the author can't really discuss the books the way he'd like to with having a few plot spoilers (though he does a pretty good job of it, I think).

I read the Emma chapter as a sample and decided these books have been out for hundreds of years so full speed ahead. That said, however, I had enjoyed watching Sense and Sensibility and Persuasion unfold so I decided to just read this as I went through the Austen books.

It also decided the order in which I'll finish reading the Austen books. Except for Pride and Prejudice which I've read more than once. I'll read that one last.

Having read Northanger Abbey and Sense and Sensibility I suddenly became addicted to Jane Austen. Persuasion was like crack. The best of Georgette Heyer style storyline combined with Jane Austen's delightfully rapier wit. I stayed up late and grabbed it every time I had a spare five minutes.

Anne's long ago spurned suitor has returned, thinking her to be heartless while she moons over him from as far away as she can get. It's a story line I knew well, as do we all by now, but it also had me on tenterhooks.

I really can't believe how invested I was in this romance. If I sped through Sense and Sensibility, I rocketed through this book. It is practically perfect in every way. What a great novel! 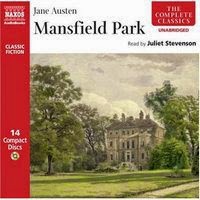 MANSFIELD PARK.
I approached this with trepidation, having heard through the grapevine that the heroine is timid, dull, and not at all like the other Austen protagonists. Luckily that made me dip into the beginning of the Mansfield Park chapter in "A Jane Austen Education" which put the heart back in me and left me open to admiring Fanny for who she is. As well as seeing that she is there to make obvious the problems with the other players, much like Catherine in Northanger Abbey.

I'd really stalled out on this. Too much Austen in a row, methinks. And then, my much loved library branch got in Juliet Stevenson's narration of the book. I can't express strongly enough what a wonderful narrator Stevenson is. She brings out the humor, the incongruities that are hidden in a few words.

I had some basic layout work come up which left me with time to listen to the book, even though I was less than enthusiastic. Contrary to my expectations, it was a real treat to have this to listen to. And I am back on the Jane-train.

And I've got Stevenson's other Austen narrations on request for further listening. Next up will be Emma.
By Julie D. at September 04, 2014