This review originally appeared at SFFaudio. 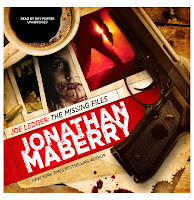 The description for this brief collection of short stories says "... author Jonathan Maberry fills in the blanks in his action-thriller 'Joe Ledger' novels."

This isn't something I'd have picked up myself and, frankly, wouldn't have bothered if it weren't sent as a review book. I am usually disinterested in add-on short stories that sew up "loose ends" of novels or serve to tell us what a character's been doing between one book and the next. In my experience, those are toss-offs and these days, what with 99-cent stories on Amazon, they just serve as money grabbers.

However, we all know I'm a sucker for Joe Ledger and I absolutely love the narrator's way with these stories so if I wasted a few hours on mental cotton candy so be it. Also I was mildly interested in what seem to be two stories that aren't connected to any novels, "Deep, Dark" and "Material Witness."

Countdown: The prequel to Patient Zero and it told me nothing I didn't learn in the beginning of the book. Honestly, it seemed as if it were a story prospectus given to a publisher to gain interest.

Zero Tolerance: The second story added a little to Patient Zero's ending since it could have been called "What Happened to Amirah." (Pardon my spelling as I've only heard the audio for the novel.) Worth paying for? Not to me.

Deep, Dark: Finally, with the third story we get to something interesting. As is the case in Joe Ledger novels, it teeters on the knife's edge between probability and supernatural/horror fiction. The Army has a little problem in one of their underground complexes. A little bio-engineered problem. It's just a "bug hunt," as it goes in one of my favorite lines from Aliens, but one that has righteousness on its side.

Material Witness: This story was more interesting than anything preceding it (or following, as it turned out ... yes, foreshadowing!). However, that was mostly because Maberry was filling us in on another series of his, the creepiness that is Pine Deep, Pennsylvania. Imagine the house from The Shining, but ... it's a whole town! Maberry's melding of the two worlds was rather intriguing but not enough to make me want to get whatever book it was he wrote about Pine Deep. For one thing, spoilers abound. I wonder if I already knew all about that "world" if the story would have kept my attention as it did.

Dog Days: The final story and the one which was the test of whether Maberry had improved at short story writing or whether the previous two just created interest because of the unfamiliar material. Yep. Choose door number two. It wasn't a terrible story, just extremely easy to figure out as Joe Ledger goes to settle a personal grudge against the world's deadliest assassin. The most interesting thing about it to me was the introduction of Ghost, the wonder dog. One feels (at least I do) that this should have been a prequel or flashback in The King of Plagues. I especially feel this since I spent much of the beginning of that book wondering what the heck happened to Ledger's cat and why only one or two sentences gave us the dog's history. This almost reads as discovery writing or something that was edited from a book. Ghost is ok, but he is definitely "made" to be Ledger's dog, as he is a Wonder Dog with super-canine reflexes and understanding.

Summing up - these files could've stayed missing. It's only four hours long but that is four hours you could use on something uniformly good.
By Julie D. at August 24, 2012