The Better to See The Pope With: Reviewing Light of the World 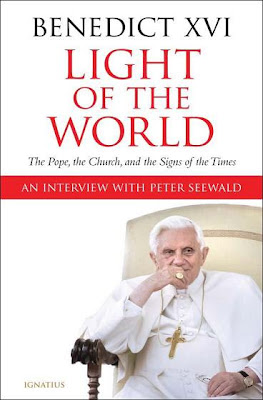 ... We are sinners. But we should not take the failure to live up to this high moral standard as an authoritative objection to the truth. We should try to do as much good as we can and to support and put up with each other. ...

I remember reading Salt of the Earth

, Seewald's first book of interviews with the Pope when he was Cardinal Ratzinger. At the time I was impressed by the straight forward honesty, clear sight, and mixture of common sense with intellectualism that characterized Cardinal Ratzinger. This is in spite of the fact that I am not fond of reading about question and answer questions or interviews in general. Because of that previous good experience, I jumped at a chance to read a review copy of Seewald's latest interview with Pope Benedict, Light of the World

, although I really wasn't sure what sort of topics might be covered.

As most people know by now, Light of the World covers questions about modern times including, but not limited to, the sex scandals, relativism, the Church and Islam, ecumenism, global warming, contraception, AIDS, women priests, homosexuality, and relativism. In other words, if there has been bad press about it lately, Seewald asked about it.

The Holy Father gives honest and candid answers. If any reader ever wanted to ask the Pope questions ripped from the headlines, then this is just the book for them. More than anything I was impressed with the Pope's realism. He answered in a way that let us know he is completely aware of what people think about various issues for the most part. As he continually pointed out, he does not exist in a vacuum, and has meetings every day with people from around the world.

I was also impressed with Pope Benedict's thoroughness and balance when discussing issues. When faced with questions about negatives  he would usually end by gently reminding Seewald that there is much good about the Church that is not taken into consideration for just one topic. Conversely, when Seewald was praising the Church highly, the Pope rarely failed to point out others who deserved much credit or that the Church could do with improvement in various areas. All round, we see a well-balanced, thoughtful man who is thoroughly down to earth.


... Pastoral care, for its part, has to seek ways of staying close to individuals and of helping them, even in, shall we say, their irregular situation, to believe in Christ as the Savior, to believe in his goodness, because he is always there for them, even though they cannot receive communion. And of helping them to remain in the Church, even though their situation is canonically irregular. Pastoral care has to help them accept that, yes, I  do not live up to what I should as a Christian, but I do not cease to be a Christian, to be loved by Christ, and the more I remain in the Church, the more I am sustained by him.

Unfortunately, I was fairly disinterested in the topics which comprised the first two-thirds of the book. Perhaps this is because I have read enough of John Allen's commentary, GetReligion's analysis of bad news reporting, and Sandro Magister's reporting/analysis that I was not seeing much new information, other than to round out my impressions of Pope Benedict. Although the Pope's insights were interesting to a degree, once one absorbs a few key outlooks, then one sees them repeated for different topics. This is as it should be, of course, as we don't want someone who is capricious in attitude.

However, I was much more taken with the last third of the book which dealt with more general questions of life and faith. Again, this is simply where my interests lie. When the issues were raised about more general everyday issues like contraception, marriage after divorce, and whether the Pope believes what he believed as a child then I was captivated by the Pope's humanity, warmth, and honesty. Also, I was impressed that sometimes he simply admitted he didn't have an answer for a problem. Too, I admired him for saying that he knew he didn't have the capacity to be Pope. That he had to let Jesus lead him because God was the only one who could fill such an overwhelming role. These were all qualities seen in the first part of the book as well, but it was here that they struck me with the most force.

I recommend this book to anyone who is interested in seeing more of the Pope's nature, of hearing his direct answers to the tough questions of modern times, and for his thoughts on how to handle everyday issues. There were many answers that I mentally marked, thinking that those were approaches which I would try to reflect when asked questions about the Church. The things that I didn't warm to were only reflections of my own interests and not of the openness and excellence of this book ... which I recommend unreservedly.


So there are by nature many issues in which, so to speak, morality suits modernity. The modern world, after all, is not built solely out of the negative. If that were the case, it could not exist for long. It bears within itself great moral values, which also come precisely from Christianity, which through Christianity first emerged as values in the consciousness of mankind. Where they are supported—and they must be supported by the Pope—there is agreement in broad areas. We are happy about that. But that cannot blind us to the fact that there are other issues that cause controversy.