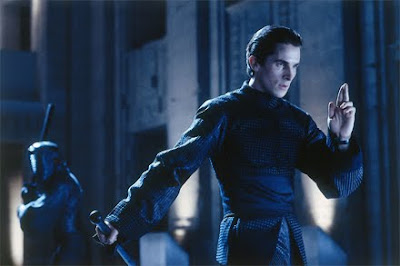 Come now to a future, after the Third World War, where a hidden leader named "The Father" has decreed that the answer is to remove emotions as they are the root of all violence and evil. Banishing emotions leads to banishing art, music, and books as well, but that is a small price to pay for peace. Or so this futuristic society believes as they take their daily doses of Prozium which sublimates feelings.

Christian Bale is John Preston, a Clerick whose job it actually is to enforce the anti-emotion laws by rooting out and destroying the underground sense-offender resistance who luxuriate in things like perfume, silk, and symphonies. One day he accidentally misses his daily dose of Prozium and ... you guessed it ... discovers what he's been missing.

In many ways, the story line is predictable but watching it unfold brings a fair number of surprises, the acting is good, and the faces are lovely (Christian Bale, Taye Diggs). As well, there is the inventive "Gun-Kata," martial art with weapons at a super-high speed which lends itself to a choreography which is simply amazing to see. This came out around the same time as The Matrix which may be why it has been overlooked by so many, but our family prefers this movie.