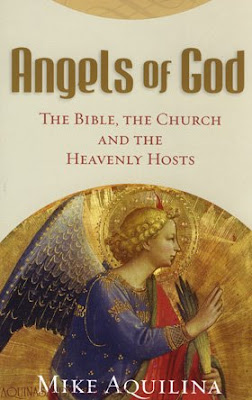 Angels of God
The Bible, the Church, and the Heavenly Host
by Mike Aquilina

Angels are persons. They can think, love and make choices. Like us, they have intellect and free will -- though their intellects make our own seem hardly worthy of the title; and their will is perfectly aligned with God's (at least in the case of the good angels), whereas our wills tend to veer and waver.

The fixity of the angelic will is the reason why we pray, in the Lord's Prayer, that God's "will be done on earth as it is in heaven." Here again, heaven means the realm of the spirits, not the expanse of the galaxies. We're praying not that we might be more predictable, like planets and asteroids, but that we might be as morally sure and true as the angels are.

Suffice it to say that it was easy to understand without dumbing it down. Altogether an informative and fascinating read about the angels and their relationship to us. It makes a good accompaniment to The Angels and Their Mission. There is some duplication of information but a surprising amount in both books stands as complements to each other. Some of that is due to their different foci in the authors' intentions for their books, naturally. For that matter, it also would be a good complement to The Rite. Although that book is about exorcism it is essentially about angels, albeit fallen angels. Reading Angels of God would be a good counterbalance for too much worrying that could come along with reading about a dark subject.

Although the subhead makes the book sound a bit dry, nothing could be further from the truth. With his customary clarity and thoroughness, Mike Aquilina not only enlightens us about angels but actually makes us realize that our angelic brethren are just that ... our brothers.

We are companions to the angels! As incredible as it seems, the Incarnation has lifted us up to a kind of equality with the powerful spirits of heaven. When people of the Old Testament fell on their faces in front of angels, the angels were often content to leave them there. But when Saint John bowed before an angel, the angel told him, "You must not do that! I am a fellow servant with you and your brethren who hold the testimony of Jesus. Worship God" (Revelation 19:10).

This should be amazing enough: angels calling themselves "fellow servants" with us puny humans. But in some ways we have even more than equality with the angels.

In Christ our humanity is assumed to God. "If we endure, we shall also reign with him" (2 Timothy 2:12), and so we render judgment with him. And whom do we judge? "Do you not know that we are to judge angels?" Saint Paul asked rhetorically (I Corinthians 6:3). It's an amazing idea: We, mere creatures of flesh and blood, will judge powerful spirits!

And if that weren't startling enough, Saint Peter talks about "the things which have now been announced to you by those who preached the good news to you through the Holy Spirit sent from heaven, things into which angels long to look" (I Peter 1:12). It seems that we know things that weren't revealed to the angels!

I also especially appreciated that the book contains entire excerpts of scripture or other works where it is referenced. Too often the reader is left to seek out another work in order to get the whole picture. In my case, I must admit, I usually skip looking up anything. Aquilina does not leave us stranded in that way and it makes a huge difference.