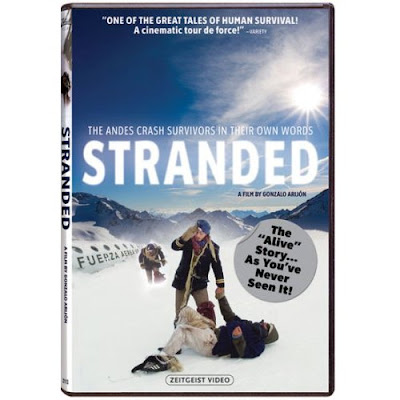 On October 13, 1972, a young rugby team called "The Old Christians" from Montevideo, Uruguay, boarded a plane for a match in Chile--and then vanished into thin air. ... 16 of the 45 passengers miraculously resurfaced. ... Thirty-five years later, the survivors returned to the crash site--known as the Valley of Tears--to recount in their own words their harrowing story of defiant endurance, intense spirituality, and indestructible friendship. ... this shocking true story finally gets the cinematic treatment it deserves. Visually breathtaking and crafted with riveting detail by documentary filmmaker (and childhood friend of the survivors) Gonzalo Arijon with a masterful combination of on-location interviews, archival footage and reenactments, Stranded is a hauntingly powerful and spiritually moving celebration of humanity.

If a rugby team and the Andes were ever mentioned to me I very vaguely would remember something about a plane crash and the survivors having to turn to cannibalism to stay alive. That was all I knew and frankly I never gave it much thought. After watching this DVD, I can say that there are hidden depths to this story that make one reflect for days afterward the indefatigability of the human spirit and tenacity of our survival instinct.

The "Old Christians" rugby team with family and friends boarded their plane in a carefree, holiday frame of mind. Most were 19 years old from upper class families. These were pampered kids dressed for spring weather who were not equipped for wilderness survival. The plane ran into a storm system high above the Andes that crashed them in the middle of a forbidding landscape. At first, grieving for those who died in the crash, tending to survivors, they waited for a rescue team to pick them up within a few hours. However, this was not to happen. As day after day went by, they began dealing with the rigors of the climate, lack of food, and the uncertainty that comes with not knowing if rescue would ever come. Eventually, with survival uppermost in their minds, they were forced to resort to cannibalism to stay alive.

This story is told strictly through the words of the survivors, their family members, and others who were part of the story. We see the faces of the men telling their story, woven with beautifully and sensitively reenacted scenes to take us through the story. There is never a single word of narration. This forces a slow pace that I found frustrating at first. I longed for a narrator to clarify locations, time lines, and provide an omniscient point of view. Gradually, I realized that we would eventually receive all that information just as everyone else did at the time. This put us even further into the story with the men, agonizing as no one came to help, suffering as they realized what must happen to survive, and holding out hope even when uncaring nature seemed certain to leave none of them alive.

The story unfolds on two levels. First, there are the simple mechanics of the rescue. I had no idea if they were found or rescued themselves, how long they endured this time stranded, or what they actually went through simply to survive on the mountain. I am deliberately refraining from discussing these details so that any similarly unaware viewers may also follow the story as it develops. Rest assured that the story is simply incredible.

Secondly, there was the spiritual and mental level of survival. The promotional materials I received for the movie spoke stirringly of how they survived with the aid of their Catholic faith. This actually was not an overarching theme and depended largely on the individual person, as one might expect with any group of people. Occasionally one person or another would speak about how saying the rosary helped him at a particular moment. Another would talk about a time when he felt distinctly the presence of God. Regardless, one cannot miss the many images of hands telling the rosary beads that the director shows in the background time and again, even when no direct words are speaking about faith.

A particularly moving instance is when the survivors talk about when they realized that they were going to have to eat the dead in order to live. I don't know why this never occurred to me but it is not as if it were a plane full of strangers, which would be horrific enough in itself. These people were all friends and, in some cases, close family members. Just watching the faces of those speaking gives an immense depth of feeling to the horror of the very idea when it surfaces and then again when it becomes clear that cannibalism must be carried out. For those who were deeply Catholic, the thought that helped carry them through was that Christ himself gave his body and blood to his followers through Holy Communion. They said that if Christ did such a thing surely they would be forgiven for following those actions through their extreme reluctance. This subject is treated with the utmost respect and reverence on all levels.

One thing that we realize above all is how precious life is, that it is worth fighting for, and just how much these men love each other both in life and in death. Especially touching was seeing the men visit the crash site with their children and the children of those who never left the mountain.