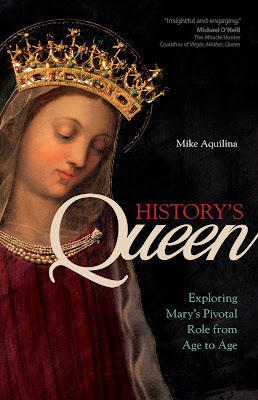 In History’s Queen, you’ll learn about the many ways Mary has left her mark on the great events of time, not only as we see them in the Bible, but also in pivotal events such as Fatima, the battle of Lepanto, and the plague. In this journey through two thousand years of Mary’s active participation in world events, each chapter of History’s Queen highlights a Marian intervention that is emblematic of a particular era, and opens our eyes to the ways in which Mary provides a vital key for understanding both our past and our future.

I have always enjoyed books which give us a glimpse of God working in history. In this book, Mike Aquilina takes us on a quick tour of the Virgin Mary leaving her marks on historical events. In so doing, he also gives beautifully lucid descriptions of historical context. I always came away with a fuller understanding of events than I had before, often linked to a better understanding of the effect it had on our times.

On the judgment day, the Koran says, God will ask Jesus whether he told the people to worship himself and Mary in addition to God, and Jesus will emphatically deny it. This verse suggests a Trinity consisting of the Father, the Son, and Mary. Many Christian commentators have said that the verse shows a profound ignorance of Christian doctrine. But it might be better to say that it shows a firsthand nowledge of Christian practice. Mohammed had not seen the Christianity of the theologians and apologists. He had seen the Christianity a merchant would see—the Christianity of common people on the edge of theChristian world. And for those common people, Mary was the route to the divine. She was everywhere. The mistake was easy to make. It is the mistake some evangelical Protestants still make today when they say that Catholics worship Mary.

This isn't just about Marian apparitions, although we are shown some of those. It also is about the times when Christians were inspired and informed by  aspects of Mary which affected behavior, art, and creativity in everything from public policy to everyday life. We are shown Byzantium and those who protected icons from being smashed, Irish missionaries to Europe and the Book of Kells, the rise of the great cathedrals and the Book of Hours, the plague and the Pieta, Luther and mass media, Guadalupe in Spain and Mexico, and more. In all cases, Mary is there to inspire Christians and care for them like a mother. Aquilina's skill in showing that through such diverse historical events not only informs but reassures.

This is a message not only of history but also a reminder that as God has moved in the past, so he continues to do today—weaving salvation history with Mary as his willing servant.