When Books Went to War by Molly Guptill Manning 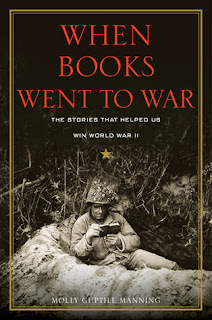 I am used to the image (probably from movies) of a WWII soldier pulling out a book to read in a spare moment, any time, anywhere. However, I didn't realize the huge effort that went into helping our soldiers' morale stay high by providing those very books. The program was begun as book drives by librarians who were outraged by German book burnings and wanted to provide ammo in the war of ideas. It was later taken over by a council who coordinated between the War Department and publishers to began printing special lightweight editions.

A wide variety of books — everything from Tarzan to Plato — were supplied throughout the war, with millions being printed and distributed regularly. These provided comfort, distraction, and much needed entertainment while inadvertently teaching an entire generation of military the pleasures of reading in an age where many would not have picked up a book except in school. They were considered so important to morale that over a million copies were stockpiled before D-Day so that each soldier would have one when boarding the transports. I was surprised to find that paperbacks were normalized for society by this process and that the standard paperback sizes of old (6x4 and 5x3) were the sizes that would fit in uniform pockets.

All of this took me through WWII with an entirely new focus and gave me a feeling of what the soldiers went through in a way I've not felt before. My favorite bits were the letters from soldiers to authors or publishers describing just how a favorite book changed their life. I especially liked the one about the officer who began reading A Tree Grows in Brooklyn by Betty Smith (a favorite among the troops) right when a battle was beginning and kept thinking about the plot all during the intense fighting and maneuvering that followed all night long. However, here is one of the most powerful stories of a soldier, expressed to author Betty Smith:


"Ever since the first time I struggled through knee deep mud ... carrying a stretcher from which my buddie's life dripped away in precious blood and I was powerless to help him, I have felt hard and cynical against this world and have felt sure that I was no longer capable of loving anything or anybody," he wrote. He went through the war with a "dead heart ... and dulled mind," believing he had lost the ability to feel.

It was only as he read A Tree Grows in Brooklyn that something inside him began to stir. "I can't explain the emotional reaction that took place, I only know that it happened and that this heart of mine turned over and became alive again. A surge of confidence has swept through me and I feel that maybe a fellow has a fighting chance in this world after all. I'll never be able to explain to you the gratitude and love that fill my heart in appreciation of what your book means to me." It brought laughter and joy, and also tears. Although it "was unusual for a supposedly battle-hardened marine to do such an effeminate thing as weep over a piece of fiction, ... I'm not ashamed," he said. His tears proved he was human.