I'm rereading this by virtue of using it for afternoon prayer. It's so good I decided to rerun the review I wrote way back in 2013 when I first read it. 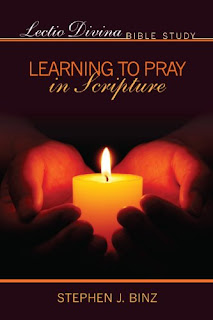 As I have mentioned before, Stephen Binz is a passionate advocate of Lectio Divina, the ancient practice of studying and praying using Scripture.

Focusing on different topics such as the Creed, the Mass, the Sacraments, or Prayer, Binz shows where they are found in the Bible, gives context for full appreciation, and helps readers learn about deeper prayer as found in the steps of lecto divina: Listening, understanding, reflecting, praying, and acting.

I have used many Bible studies, but Learning to Pray in Scripture is one of my favorites. Binz shows different sorts of prayers by moving through the Bible to show the various characters who employ them under different circumstances. I felt as if I grew to understand each particular person whose prayers were highlighted. This is only natural after considering them at length, but it is partly the result by Binz's thoughtful commentary and prompting questions.

Binz often brought up points of view that had never occurred to me, such as the comment below that prayer doesn't have to be theologically correct. I'd never thought about such a thing before and it made me wonder if I was a bit too "correct" in trying to speak to God "properly" rather than just trying to have an honest conversation, no matter where it led us.

I also really appreciated the overview of prayer which covered forms of Biblical prayer and how to use them today, the disposition to cultivate for prayer, and the characteristics of prayer as seen in the lives of Israel's heroes, ancient prophets, Jesus' life, and more. Suddenly I was thinking about prayer and how to converse with God in a whole new way.

I can't praise Binz's prayer prompts highly enough. All too often, such prompts are simple and surface level. Worse, they often don't relate to my own life or needs. His cut to the heart of our relationship with God and always leave me pondering and talking to God. That's really a rare reaction for me when reading such prompts, as I said.

The snippets below just scrape the surface in the treasures that are found within this book. All Scripture is quoted completely in the book so you need no other references, although I didn't include it below.

Listening
In establishing the covenant, God had promised to make Abraham a blessing to all the peoples of the earth. This bold prayer of intercession teaches us what it means to pray humbly but confidently in the context of a covenantal relationship with God. We have the same opportunity to intercede before God for the people of the world.

Understanding
… Abraham first chooses the number fifty as his bartering figure: save the city on behalf of fifty righteous people. He purposely chose a low number, thinking that in the typical haggling style of the Middle East, God would choose a much higher number, and then they would eventually meet somewhere in the middle. But Abraham's strategy is undone by god's immediate acceptance of his offer. Lowering the offer to forty-five, forty, thirty, twenty, and finally ten, Abraham discovers that God is far more merciful than he had imagined.

Reflecting
Since prayer is conversational and emotional, it does not have to be theologically correct. What are some of the outrageous questions and statements found in this prayer? In what ways to these kinds of utterances enrich my prayer?

Acting
Like the early Christians in Jerusalem, continue letting the words you pray become the life you live.

• Rather than ask God to spare them from hardship, the early Christians prayed only for the courage to face it and to keep on speaking God's word with boldness. For what purpose do I need to pray for boldness? What can I do today to claim the strength and courage God offers to me?