Rereading: The City by Dean Koontz

I recommended this book to my mother and then I realized it had been six years since I'd read it and I didn't remember it very well at all. It's been a real pleasure to reread so I'm rerunning the review. 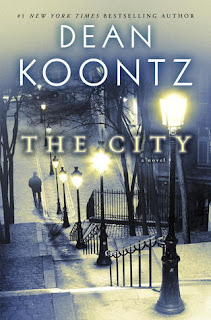 The voice in this book reminds me of another classic Dean Koontz character, Odd Thomas, in its sweetness and innocence. However, this is narrated by a 10 year old instead of a grown man.

The 10-year-old is a skinny, black, musical prodigy named Jonah Kirk. The time is the mid-1960's when chaos reigns in America. The place is a mysterious City which is never named. Unless you want to call it Pearl, after the mysterious woman who appears and disappears mysteriously in Jonah's life and who tells him that she is the soul of the City.

This story looks at how we respond when it seems that the world is an unstable, chaotic place where unexpected evil can drop on you at any moment. Sound like any other time period you know? Such as the one we're living in right now? Koontz's story has a subtle supernatural gloss and doesn't focus on horror nearly as much as other books. Instead it focuses on coming of age, the power of community, the power of kindness, and overcoming adversity. As always, there is a strong theme of good versus evil but it is mostly kept in the real world.

A lot of the charm of this book comes from Koontz's ability to remind us what it is like to interpret the world as a supernatural, magical place because of youth's sheer inexperience. The relationship between Jonah and his upstairs neighbor, Mr. Yoshioka was especially interesting to watch flowering. And if you like jazz, big band, and swing, there are enough references to send you to start up your own soundtrack while you read.

It's not what I think of as typical Dean Koontz fiction, but I greatly enjoyed it.
By Julie D. at April 22, 2020