Signs of Life by Scott Hahn 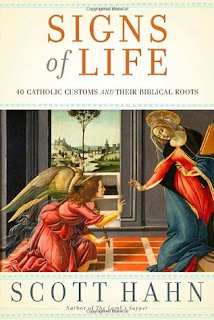 A clear and comprehensive guide to the Biblical doctrines and historical traditions that underlie Catholic beliefs and practices. Single chapters for each topic illuminate the roots and significance of all things Catholic, including the Sign of the Cross, the Mass, the Sacraments, sacred images, the celebration of Easter, Christmas, and other holidays, daily prayers, and much more.

I picked this up cheap on the Kindle during a daily deal at Amazon but never got around to reading it. Then my book club chose it and once I began, I was impressed at the depth with which each custom was covered. Partly that has to do with the connection to the biblical roots, as the subtitle says. Partly it is due to the way it is written, which is thoughtful while being very accessible.

Sometimes I was surprised by what I found in a custom I thought I thoroughly understood, like the idea that the longing of Advent now reflects the post-Christian world. Sometimes I was reminded of practices which I'd fallen out of, like intercessory prayer. I was often especially struck by the "Ponder in Your Heart" segment ending each custom, taken from the writing of saints, Church Fathers, the Catechism, or modern spiritual writers.

I had to get a print copy so I could mark my favorite parts for later reference. I read a custom a day which made a great devotional for 40 days. Definitely recommended.

Note: be sure you get the full book with all 40 customs. There is a special Augustine Institute version out there which only has 20 customs. I was sent that one by used book stores more than once until I bit the bullet and bought the hardcover.
By Julie D. at July 24, 2019