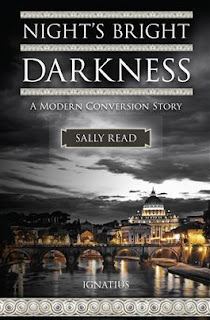 In the spring of 2010 Sally Read was heralded as one of the bright young writers of the British poetry scene. Feminist, atheist and deeply anti-Catholic, she was writing a book about women's reproduction and sexuality when, during her research, she spoke with a Catholic priest. That mysterious encounter led Sally on a dramatic journey of spiritual quest and discovery which ended up at the Vatican itself, where she was received into the Catholic Church in December of that year.

Read confronts head on the burning question for God that every true Christian harbors: What do you want me to do? In an age of increasing secularism, and in the wake of disillusionment with the Catholic Church following disclosures of abuse, the book takes us to the core of what the Church is all about: Christ and the yearning to be near him.

This was my book club's recent selection. About halfway through I was not sure if I liked Read herself very much but I was sure that I liked her unutterable honesty. She was aggressive and argumentative and irrepressibly attached to extreme progressive thinking. We've all either been her or met her. What I loved was her searing honesty about herself and her conversion. I can forgive almost anything of such an honest person. By the end, as happens with us all if we allow God His way, Read has become someone who is both changed and more herself in a way she never was before.

It was interesting being a convert and reading this. I recognized moments so specifically from my own journey and yet, of course, they were completely foreign because they were shaped to Sally Read's soul and not my own. It made them all the more inspiring for me.

Moved me to the point of tears several times and has helped me on my own journey at this point. Definitely recommended.
By Julie D. at October 04, 2018