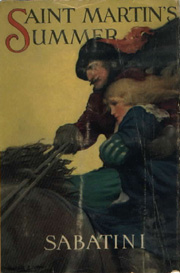 The life of an heiress is in jeopardy and her only hope is to place her trust in the wiles of a middle-aged swordsman with no use for "women's troubles." As the plots of the conspirators converge it will take all the wiles and accumulated wisdom of Martin Marie Rigobert de Garnache uncover their identity, to save Valerie de La Vauvraye and keep his promise to his Queen.

What a fun swashbuckler this was, truly one of Sabatini's better books and surely an homage to Alexandre Dumas's adventures.

As mentioned in the summary above, Garnache is wily, wise, and an accomplished swordsman but the bane of his career has been his unbridled temper. Watching him struggle to overcome it and the result of his ill-timed explosions is a lot of fun because we can sympathize with his frustration.

He despises the fairer sex, "Let me tell you that this is the first time in my life that I have been concerned in anything that had to do with women." This makes it more ironic when the main players in the story are all women: the Queen of France, the girl he must rescue (who turns out to be completely admirable) and the wicked, willful Marquise de Condillac is his equal, foiling his attempts repeatedly. Poor Garnache does nothing but deal with women, except when he's sword fighting, of course.

Definitely recommended for light reading.
By Julie D. at August 17, 2018