The Boys in the Boat by Daniel James Brown 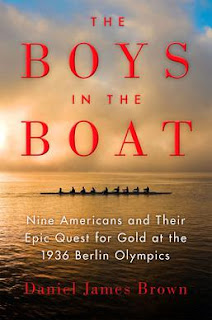 The story of the University of Washington's 1936 eight-oar crew and their epic quest for an Olympic gold medal, a team that transformed the sport and grabbed the attention of millions of Americans. The sons of loggers, shipyard workers, and farmers, the boys defeated elite rivals first from eastern and British universities and finally the German crew rowing for Adolf Hitler in the Olympic games in Berlin, 1936.

The Boys in the Boat is an irresistible story about beating the odds and finding hope in the most desperate of times—the improbable, intimate story of nine working-class boys from the American west who, in the depths of the Great Depression, showed the world what true grit really meant.

I am really grateful that this book was selected for my Catholic women's book club. I'd certainly never have picked it up otherwise.

It paints a vivid picture of America in that time and what it means to be American specifically for one of the boys on the crew, of Hitler's Olympics and the whitewashing of Germany in preparation, and is inspirational about a lot of things we've forgotten today and need to remember.

I'm especially impressed at the way the author takes us through a similar journey to that of Joe, the main crew member who is focused on. We initially see alternating chapters about Joe's life, which is really tough, and the assembling of the crew over several years. As we get closer to the U.S. races and the Olympics, Joe's particular story is not as prominent as he becomes one with the crew, and realizes just what it is that he is representing. The author is skilled in putting us in a like frame of mind.

I certainly never thought I'd be moved to tears by a boat race but it happened. More than once. Even knowing how it turns out didn't reduce my tension ... I couldn't put it down.
By Julie D. at June 27, 2018