The Fourth Cup by Scott Hahn 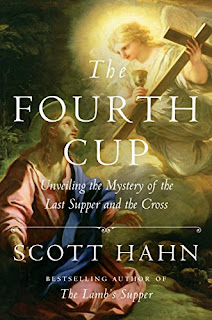 Dr. Scott Hahn explains Christ's Paschal sacrifice on the cross as the fulfillment of the traditional fourth cup used in the celebration of Passover, drawing symbolic parallels to the Last Supper and Christ's death on Calvary. Through his scholarly insights and important biblical connections, Mass will come alive for you as never before.

I first encountered Scott Hahn's writing not long before I entered the Church. My godmother had given me Rome, Sweet Home which was co-written with his wife, Kimberly, and is their joint conversion story.

After that, I picked up A Father Who Keeps His Promises which traces, as the subtitle tells us, God's covenant love in scripture. I didn't know what that meant. I just wanted something more by that author. It proved formational as I was pulled into a new world where the Bible had layer upon layer of deeper meaning than I'd encountered before. It was not only formational in my faith life, but in my reading and movie viewing. I learned to dig deeper and find meaning everywhere.

I bring these experiences up because The Fourth Cup is something like a synthesis of both of those books, plus a little extra. Sparked by a teacher's question which seeming had no answer, Scott Hahn began trying to find out the meaning of Jesus's final words on the cross, "It is finished." What was the "it" which was finished? This sent him on a long journey which ended in Hahn's entering the Catholic church and digging deep into the meaning of Passover and Christ's death on the cross.

The Fourth Cup is part detective story, part memoir, part conversion story, and partly linking the Catholic faith back to Jewish roots. The entire mix is very easy to read and thought provoking. I found it inspirational and during Lent I have been very aware of the real meaning of "The Lamb" every time he is mentioned during Mass. Definitely recommended.
By Julie D. at February 28, 2018