God or Nothing: A Conversation on Faith with Nicolas Diat — by Cardinal Robert Sarah 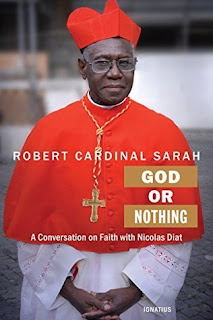 In this fascinating autobiographical interview, one of the most prominent and outspoken Catholic Cardinals gives witness to his Christian faith and comments on many current controversial issues. The mission of the Church, the joy of the gospel, the heresy of activism , and the definition of marriage are among the topics he discusses with wisdom and eloquence.

I began this after a conversation with friends about the Catholic Church in Africa. I expected the entire thing to be biography, but the last 2/3 or so was Cardinal Sarah answering questions about the global Church today, evangelization, and connecting with God. As a result it was informative and inspirational in equal measures. Cardinal Sarah frequently quoted Popes Paul VI, John Paul II, Benedict XVI, and Francis which made for an interesting juxtaposition of papal styles, all with the same message.

I was really interested in the global view and sometimes surprised at how provincial my own American thinking was. For example, Cardinal Sarah was criticizing the way that parishes will personalize the liturgy outside of the bounds of what is allowed. I thought of the dumbing down that is often done and was nodding in agreement. His example turned out to be that in Africa Masses can sometimes last 6 hours with continual dancing and so forth. I had to laugh at my own surprise and then was thoughtful because the impulses that lead to the very different personalizing of the Mass showed the same problem — glorification of the people and not of God. Fascinating.

I also enjoyed Cardinal Sarah's down-to-earth style in talking about current issues. He's not afraid to tell how the cow ate the cabbage. As the interviewer, Nicholas Diat, says, "Sometimes, the cardinal's thinking seems tough and too demanding. It is certainly a great mystery how someone can be so radical only to arrive at last at a happy medium. Robert Sarah displays a gentle and angelic stubbornness in all things."

I think that what makes the cardinal's tough, demanding thinking palatable is that he always is aiming at dignity for each human person. And that, as he tells us, comes from loving God. Thus his declarations often end in gentle treatment for the individuals most affected by the problems he is detailing.

This is a book I'll be coming back to. For one thing it really made me think of Pope Benedict XVI's style and I've been missing that for a while now. Highly recommended.
By Julie D. at January 23, 2018