To Light a Fire on the Earth by Robert Barron and John L. Allen, Jr. 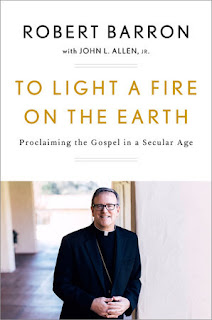 Secularism is gaining influence and increasing numbers of people see religion as dull and backward. Robert Barron wants to illuminate the beauty, intelligence, and relevance of the Catholic faith.

Touching on everything from Jesus to prayer, science, movies, atheism, the spiritual life, the fate of Church in modern times, beauty, art, and social media, Barron reveals why the Church matters today and how Catholics can intelligently engage a skeptical world.

I loved this book. It's a quick read that left me enthusiastic about spreading the faith and inspired in my own faith. In fact, within one day of beginning to read I was quoting it around the house and changing my own actions based on the inspirations. I expected to learn more about Barron's life and ministry but not that it would begin to change me.

I'm a fan of Bishop Barron's homilies and his Catholicism documentary series which was shown on PBS stations around the country. But what he's really known for, and where he got his social media start, is his YouTube videos where he talks about everything from baseball to movies to Catholic doctrine. This has drawn an audience ranging from faithful Catholics to angry atheists. So he's a pro at discussing the beauty and truth of Catholicism with a diverse crowd.

This book looks at both Barron's life and his philosophy behind "proclaiming the Gospel in a secular age." It is the result of twenty hours of interviews conducted by John L. Allen, Jr., who is an acclaimed Catholic author and journalist. I was really looking forward this book — and it lived up to my expectations. As you can see from my opening paragraph here.

Barron discusses leading people into a "space where they may be ready to hear and embrace those truths" by remembering that what you're trying to do is introduce them to friendship with Jesus. He talks about the fact that his enthusiasm is because he's trying to bring something positive into people's lives - that he's so on fire about the truth of Catholicism that he can't stop from sharing it because he wants everyone to have the goodness he experiences. He talks about finding the role God has designed for us in life, much as a character in a novel finds they are key to the plot even if they aren't a "main" character. And there is is love of Scripture, of how beauty shows truth, and much more.

All these things resonated with me and some of them were vivid reminders at times when I needed a pick me up or a good point in a discussion with a friend.

I think you'll find those things in here too. Highly recommended.
By Julie D. at November 06, 2017