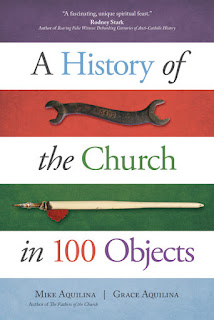 The history of the Church didn't take place shrouded in the mists of time. It actually happened and continues to happen through things that we can see and sometimes hold in our hand.

This is the Christian answer to Neil MacGregor's New York Times bestseller A History of the World in 100 Objects.

This is a brief history of the Church, complete with pictures of the items which serve as touchstones for bringing up important historical events. The items include the Christian things you might expect but also range into seemingly non-Christian things like Islamic coins, an Egyptian boy's math notebook, and a medieval science beaker.

Two or three pages of brief yet comprehensive commentary accompany each item. It is easy to read and even-handed, yet never dumbs it down. At the end of each entry, there are two recommended books listed for those who would like to pursue a topic in greater depth. That was a thoughtful feature I really liked, even as my reading list grew and grew.

I especially enjoyed the way the authors fleshed out our understanding of events, often with thought provoking questions or comments. For example, in the instance of the Islamic coin, we see that the Roman emperor may have given their subjects reason to see Islamic conquerors as a decent governing option.

The conquered didn't turn Islamic all at once. In some places, they were given a stark choice: convert, submit to the tax, or die. But the Umayyads were more tolerant, recognizing the value of Christians and Jews as a steady tax base.

This allows us a more nuanced picture of history than we're often given. And it opens the door for questions of how the modern world tempts me to let my Christianity wither slowly away under gentle pressure. The authors do this again and again. A wedding ring brings considerations of how Christian marriage differed from pagan marriage. Armor brings a consideration of how Pope Gregory gradually moved warrior culture from waging war to knightly behavior.

There are also nuggets of information I'd never heard. I didn't know that Napoleon kidnapped Pope Pius VII from the Vatican. Or that Pius VII later gave shelter in the Vatican to members of Napoleon's family. I knew Cardinal Cisneros was a stalwart defender of American natives but not that he cooperated with the expulsion of Muslims and Jews from Spain. In almost every entry there is something showing that history is more complex than we realized.

In essence, what one learns reading this book is that "The Church on earth is always in motion. Catholic doctrine and devotion are always developing. And every age presents particular challenges with require a creative response." As earthly pilgrims heading toward heaven, we can draw inspiration and strength from where the Church has been on that same road.

I've got more pages marked in this book than you've got time to read. So just go get this book and read it! It made a great devotional for me. I read an entry (or two or three) daily and found it invigorating and centering as a start to the day.
By Julie D. at November 29, 2017