Thank You for Asimov's Guide to Shakespeare 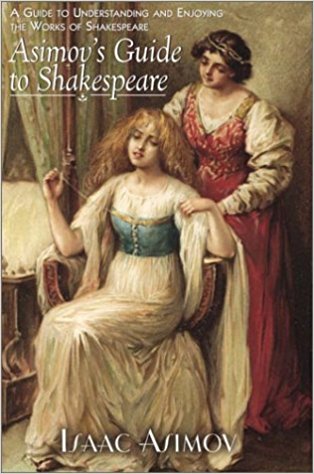 I was surprised and delighted to find Asimov's Guide to Shakespeare delivered to my door this morning. I don't know who sent me this gift, but thank you! This is a book I felt I was going to have to keep until the library demanded it back (and with 99 renewals, that could be a long time). Now I have my very own copy to peruse. I have been meaning to review it so this is a good opportunity.


Shakespeare's genius is marked by his rare ability to appeal to theatergoers of all types and all levels of education. But for most modern folks, the Greek and Roman mythology and history, let alone the history of England and the geography of sixteenth-century Europe that his works are laden with, are hardly within our grasp. Isaac Asimov comes to making obscure issues clear to the layperson, selects key passages from 38 of the great bard's plays plus two of his narrative poems and, with the help of beautifully rendered maps an figures, illuminates us about their historical and mythological background.

When Scott and I discussed Hamlet recently, it prompted me to request Asimov's Guide to Shakespeare from the library. Rose laughed when she saw it because, like most people, she thought of him solely as a science fiction author. However, Isaac Asimov wrote over 400 books during his lifetime, many on factual subjects. I'd glanced through his guides to the Old and New Testaments and found them informative, even if I felt he sometimes over-reached in conclusions about theology. Indeed, our pastor told me that he sometimes uses those books as reference materials for historical context.

In the Shakespearean case, I was delighted with the material on the plays I sampled in Asimov's book. Asimov explains possible sources for Shakespeare's story ideas, gives historical context which includes maps and family trees, and explains cultural ideas that the audience would have understood at the time but that may escape us. This includes every literary, historical, or mythological allusion explained so that we don't have to wonder what's being gotten at.

Asimov also gives his commentary on the plays as he explains the story.


... It isn't generally pointed out that Claudius' predicament in this play is exactly that of Hamlet. Hamlet wants to kill the King, but the King wants to kill Hamlet. Neither is safe as long as the other is alive. But the King, as well as Hamlet, cannot take the simple road and simply kill. The King is but new on the throne and can scarcely yet feel secure; to kill the son of the preceding King would easily raise enough hostility against himself to hurl him from the throng. Just as Hamlet needs to do more than merely kill the King, but must gain the throne too, so the King needs to do more than merely kill Hamlet, but must keep the throne too.

The comments are generally insightful although I sometimes felt he was over-reaching or reflecting too much thinking from the 1970s when he was writing. The frequent, though usually brief, attribution of close male friendship to homosexuality is one of those moments when we must recall we are under no obligation to agree with everything. And those moments are few and far between.

Asimov's style is fresh and personable, while his knowledge is encyclopedic. You can tell he loves these plays and is having a good time talking about them. And we have fun reading him. This is indeed a wonderful reference which anyone will treasure while diving into Shakespeare.

Again, thank you so much to my anonymous benefactor!
By Julie D. at September 20, 2017