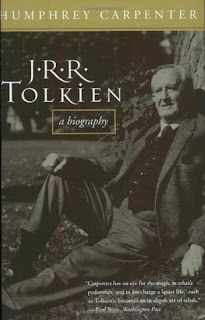 Born in South Africa in January 1892, John Ronald Reuel Tolkien was orphaned in childhood and brought up in near-poverty. He served in the first World War, surviving the Battle of the Somme, where he lost many of the closest friends he'd ever had. After the war he returned to the academic life, achieving high repute as a scholar and university teacher, eventually becoming Merton Professor of English at Oxford where he was a close friend of C.S. Lewis and the other writers known as The Inklings.

Then suddenly his life changed dramatically. One day while grading essay papers he found himself writing 'In a hole in the ground there lived a hobbit' — and worldwide renown awaited him.

I recently read Humphrey Carpenter's book, The Inklings, for a discussion at A Good Story is Hard to Find podcast and it piqued my interest in his biography of one of my favorite authors. I liked The Inklings but this book was even better, possibly because Carpenter was focusing on one person instead of a group.

It gave a thorough story of Tolkien's life without sugar coating his flaws but in a way that allowed me to understand and appreciate him as both a person and author. I'm not usually very interested in biographies but read this in record time, which is a tribute to Carpenter's skill in finding a fascinating story in the outwardly mundane life of an Oxford professor.

Of course, like Dr. Who's TARDIS, we're all bigger on the inside and Tolkien's inner landscape held a vast imagination coupled with interest in so many topics that he was sometimes unable to finish a project unless prodded by deadlines or friends. It is Humphrey Carpenter's ability to reconcile Tolkien's inner and outer man, while including his popular fiction in the timeline, that make this book so riveting. We feel we truly know J.R.R. Tolkien by the end.