Not your mother's fairytale: Cinder Allia by Karen Ullo 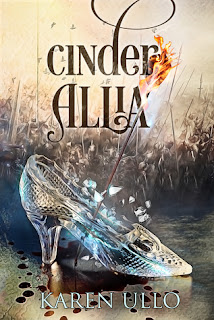 Cinder Allia has spent eight years living under her stepmother’s brutal thumb, wrongly punished for having caused her mother’s death. She lives for the day when the prince will grant her justice; but her fairy godmother shatters her hope with the news that the prince has died in battle. Allia escapes in search of her own happy ending, but her journey draws her into the turbulent waters of war and politics in a kingdom where the prince’s death has left chaos and division. Cinder Allia turns a traditional fairy tale upside down and weaves it into an epic filled with espionage, treason, magic, and romance.

I really enjoyed Karen Ullo's first novel, Jennifer the Damned, which was a fascinating, unexpected vampire story. So I was interested to see what she'd do putting an "untraditional" spin on a familiar fairy tale (is that a genre yet?).

She begins in full blown "this isn't your mother's fairytale" style with Cinder Allia (Cinderella) learning from her fairy godmother than the prince has just been killed in battle. Because the fairy godmother messed up. Ouch.

Where do you go from there? We do have a wicked stepmother, a ball for all the maidens in the land, a lost slipper, cinders, and many of the traditional props, but they all turn up in unexpected ways. I thoroughly enjoyed it when they would appear, woven into a richer, fuller story that included a really interesting political situation with a neighboring country.

The story is told from multiple points of view, including the royals scrambling to recover from the prince's death. Several themes come to the fore. All the characters are driven by some sort of loss or failure while struggling with how to balance truth, justice, and mercy. And, of course, love.

There is also some background about how Allia's mother died and why her father allows her to be treated so badly (he's still alive in this version). I didn't enjoy this part as much because there were a couple of points that rang false to me, emotionally.

My quibbles are not enough to keep the story from being entertaining and definitely worth reading. Cinder Allia is a richly woven tale that stands on its own merits.