Through Darkest Zymurgia! A Ripping Yarn by by William H. Duquette 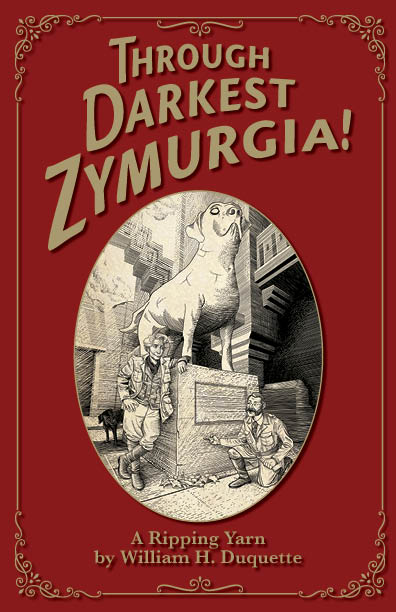 Through Darkest Zymurgia! is what you'd get if you crossed P.G. Wodehouse with H. Rider Haggard and sprinkled a generous dose of Douglas Adams over the whole.

Professors Thintwhistle and Carbuncle go on a ripping yarn of exploration and adventure in a world almost — but not quite — entirely unlike our own. When a determined University donor wields his influence, the professors are forced to abandon their planned summer tour of taverns of exotic cities in the Known World. Instead they must go where no adventurers have gone before. Not, though, without a certain predictability to their new goal as we find when an admiral falls into conversation with Professor Thintwhistle about their destination of Zymurgia.


The admiral sat back in his chair. “What do you expect to find?” he asked.

“Beer,” I said. “That’s what Zymurgia means, you know…the land of brewing. They’ve been selling beer to the Serosans for thousands of years. The trade is only carried on in a small way these days; just with the folk at the base of the plateau.”

“It seems a long way to go to get a drink,” said Wyburn.

Most of the humor tends to build upon long setups and so, as in many Victorian books, takes a while to hit home. Suffice it to say that this Victorian-style tale of exploration retains genuine mystery and adventure while being infused with humorous whimsy.

Full disclosure: I enjoyed it so much that I volunteered to do the layout. That's because I'll be rereading it in the years to come. This is a thoroughly enjoyable tale and I hope author William Duquette will favor us with many more featuring the famed Professors Thintwhistle and Carbuncle in the future.
By Julie D. at May 03, 2017