I reviewed this over 10 years ago and, just having reread it for an upcoming podcast conversation, thought I'd rerun the review for those who missed it the first time around. 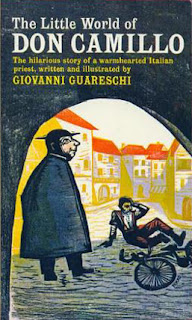 THE LITTLE WORLD OF DON CAMILLO
by Giovanni Guareschi

You would be hard pressed to find a more charming book anywhere than this set of short stories.

Set in a small Italian village soon after World War II, we see the priest Don Camillo repeatedly come up against his sworn enemy Peppone. Peppone is an atheist who is the head of the local Communist party and, therefore, against Christianity. Both are hotheads who are inclined to solve problems with their fists and the occasional Tommy gun before turning to more peaceful measures. One soon learns that both men quarrel because they are so much alike that neither will give way and that, when push comes to shove, they will work together for the common good.

Whenever Don Camillo is in over his head, he talks to Christ on the crucifix in his church. We get to hear Christ's wise advice and his occasional, necessary words of reproval as Don Camillo goes about shepherding the souls of the village. In this scene the local communists have threatened to shoot anyone who participates in a scheduled religious procession.


... Don Camillo found the square as bare as a billiard ball.

"Are we going now, Don Camillo?" asked Christ from above the altar. "The river must be beautiful in this sunshine. I'll enjoy seeing it."

"We're going all right," replied Don Camillo. "But I am afraid that this time I shall be the entire procession. If You can put up with that..."

"Where there is Don Camillo he is sufficient in himself," said Christ smiling.

Don Camillo hastily put on the leather harness with the support for the foot of the cross, lifted the enormous crucifix from the altar and adjusted it in the socket. Then he sighed: "All the same, they need not have made this Cross quite so heavy."

"You're telling Me!" replied the Lord smiling. "And I never had shoulders such as yours."

A few moments later Don Camillo, bearing his enormous crucifix, emerged solemnly from the door of the church. The village was completely deserted; people were cowering in their houses and watching through the cracks of the shutters.

"I must look like one of those friars who used to carry a big black cross through villages smitten by the plague," said Don Camillo to himself. Then he began a psalm in his ringing baritone, which seemed to acquire volume in the silence.

After crossing the Square he began to walk down the main street, and here again was emptiness and silence. A small dog came out of a side street and began quietly to follow Don Camillo.

"Let it alone," whispered Christ from His Cross. "Then Peppone won't be able to say that not even a dog walked in the procession."

The street curved and then came the lane that led to the river bank. Don Camillo had no sooner turned the bend when he found the way unexpectedly obstructed.

Two hundred men had collected and stood silently across it with folded arms. In front of them stood Peppone, his hands on his hips.

Don Camillo wished he were a tank. But since he could only be Don Camillo, he advanced until he was within a yard of Peppone and then halted. Then he lifted the enormous crucifix from its socket and raised it in his hands, brandishing it as though it were a club.

"Lord," cried Don Camillo. "Hold on tight; I am going to strike!"

But there was no need, because the men scattered before him and the way lay open. Only Peppone, his arms akimbo and his legs wide apart, remained in the middle of the road. Don Camillo put the crucifix back in its socket and marched straight at him and Peppone moved to one side.

"I'm not shifting myself for your sake, but for His," said Peppone, pointing to the crucifix.

"Then take that hat off your head!" replied Don Camillo without so much as looking at him. Peppone pulled off his hat, and Don Camillo marched solemnly through two rows of Peppone's men.

When he reached the river bank he stopped. "Lord," said Don Camillo in a loud voice, "if the few decent people in this filthy village could build themselves a Noah's Ark and float safely upon the waters, I would ask You to send a flood that would break down this dike and submerge the whole countryside. But as these few decent folk live in brick houses exactly like those of their rotten neighbors, and as it would not be just that the good should suffer for the sins of scoundrels like Mayor Peppone and his gang of Godless brigands, I ask You to save this countryside from the river's waters and to give it every prosperity."

"Amen," came Peppone's voice from just behind him.

"Amen," came the response of all the men who had followed the crucifix.

Don Camillo set out on the return journey and when he reached the doorway of the church and turned around so that Christ might bestow a final blessing upon the distant river, he found standing before him: the small dog, Peppone, Peppone's men and every inhabitant of the village, not excluding the druggist, who was an atheist, but who felt that never in his life had he dreamed of a priest like Don Camillo, who could make even the Eternal Father quite tolerable.

At first because of the format and simplicity of some of the stories I mistakenly thought that these were simply light hearted tales, featuring simplistic morality. Nothing could be further from the truth. However, the simplicity is deceptive and the problems that the characters must solve are often true to life and painful. 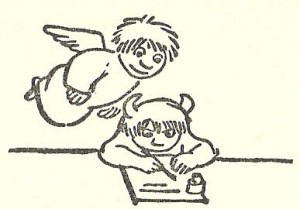 Did I mention that Guareschi did his own illustrations for the stories? They are charming.

There are so many good moments that I could post the entire book. However, I will leave you with this additional lengthy excerpt which answers the question of whether praying for your favorite team to win works or not. Christ's fondness for his priest even when he has done the wrong thing makes me smile and this is a good example.


Don Camillo was bewildered. He ran off to the church and knelt in front of the altar. "Lord," he said, "why did You fail me? I have lost the match."

"And why should I help you more than the others?

Your men had twenty-two legs and so had the Dynamos, Don Camillo, and all legs are equal. Moreover, they are not My business. I am interested in souls. Don Camillo, where are your brains?"

"I can find them with an effort," said Don Camillo. "I was not suggesting that You should have taken charge of my men's legs, which in any case were the best of the lot. But I do say that You did not prevent that dishonest referee from calling an unjust foul against my team."

"Errors happen in most circumstances, but not in sport! When the ball is actually there ... Binella the clock-maker is a scoundrel ..." Don Camillo was unable to go on because at that moment he heard an imploring voice and a man came running into the church, exhausted and gasping, his face convulsed with terror.

The crowd had reached the church door and was about to pour into the church itself. Don Camillo seized a weighty candlestick, and brandished it menacingly. "Back! In God's name or I strike!" he shouted. Remember that anyone who enters here is sacred and immune!" The crowd hesitated.

"Shame on you, you pack of wolves! Get back to your lairs and pray God to forgive you your savagery."

The crowd stood in silence, heads were bowed and there was a general retreat.

"Make the sign of the cross," Don Camillo ordered them severely, and as he stood there brandishing the candlestick in his huge hand, he looked like Samson.

Don Camillo stood back and closed the church door, drawing the bolt, but there was no need. The fugitive had sunk into a pew and was still panting. "Thank you, Don Camillo," he murmured.

Don Camillo made no immediate reply. He paced to and fro for a few moments and then pulled up opposite the man. "Binella!" he said furiously. "Binella, here in my presence and that of God you dare not lie! There was no foul! How much did that heretic Peppone give you to call a foul in a tied game?"

"Get out," bawled Don Camillo, pointing to the door.

Alone again, Don Camillo turned toward Christ. "Didn't I tell You that the swine had sold himself? Haven't I a right to be mad?"

"None at all, Don Camillo," replied Christ. "You started it when you offered Binella two thousand lire to do the same thing. When Peppone bid five hundred lire more, Binella accepted."

Don Camillo raised his hands. "Lord," he said, "but looking at it that way makes me the guilty man!"

"Exactly, Don Camillo. When you, a priest, made the first offer, he assumed it wasn't wrong and then, quite naturally, he took the more profitable bid."

Don Camillo bowed his head. "And do You mean to tell me that if that unhappy wretch gets beaten up by my men, it will be my fault?"

"In a certain sense, yes, because you were the first to lead him into temptation. Nevertheless, your sin would have been greater if Binella, accepting your offer, had agreed to cheat on behalf of your team. Because then the Dynamos would have done the beating up, and you would have been powerless to stop them."

Don Camillo reflected awhile. "In fact," he said, "it works out better that the others won."

"Then, Lord," said Don Camillo,'"I thank You for having let me lose. And if I say that I accept the defeat as a punishment for my dishonesty, You must believe that I am really penitent. Because, to see a team like mine, who could easily swallow and digest a couple of thousand Dynamos, to see them beaten ... is enough to break one's heart, and cries for vengeance to God!"

"You don't understand me," sighed Don Camillo. "Sport is a thing apart. Either one cares or one doesn't. Do I make myself clear?"

"Only too clear. I understand you so well that ... Come now, when are you going to get your revenge?"

Don Camillo leaped to his feet, his heart swelling with delight. "Six to nothing!" he shouted. "Six to nothing that they never even see the ball! Do You see that confessional?"

He flung his hat up in the air, caught it with a neat kick as it dropped and sent it like a thunderbolt into the little window of the confessional.