Short Review: Brilliant fantasy from a world class writer. Super, super, super good. This book comes out in a week and is part one of two. (Because I realize my super-long review ... which you should read anyway ... might be a TLDR for some.) 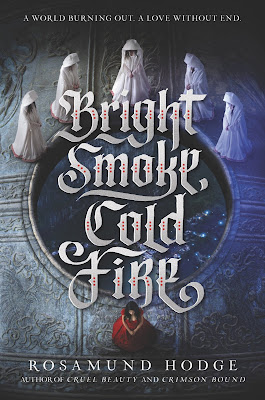 The world was made from the blood of gods. The blood of men sustains it now. So said the Sisters of Thorn. Runajo did not believe in the gods, but she didn't doubt the power of spilled blood.

Rosamund Hodge retold Beauty and the Beast in Cruel Beauty and she retold Little Red Riding Hood in Crimson Bound. Not that you'd necessarily know that if you weren't told before you began reading.  Hodge weaves complex tales in completely unique worlds of her own imagining, with heroes and villains whose imperfections make them fascinating and compelling.

Now Romeo and Juliet serve as a springboard into a dystopian fantasy world where there is one city left standing. Without blood the magic will fail and the walls will fall. And when that happens ... the zombies will get in.

This book shows the originating tale a little more clearly than her previous books. There are feuding clans following entrenched beliefs, there are Shakespearean quotes and poetry, there are masked balls, there is forbidden love, and even an apothecary. Romeo and Juliet can never acknowledge their love publicly. However, these elements come in a tale where Romeo and Juliet are side characters compared to the the two narrators.

The righteous atheist Runajo has joined the religious order who maintains the walls because she knows the magic is failing. Seeking long-forgotten spells means finding a way into the Sunken Library, awash in the living dead. When she encounters Juliet, they must offset each other's weaknesses if they are to succeed in averting disaster.

Paris is a pure-hearted true believer in his clan's destiny to help save their people. When his life becomes inextricably bound with Romeo's, his world turns topsy-turvey in a quest that takes them through the lawless underworld of the Lower City.

Paris and Runajo are fully realized, fully complicated human beings with faults, hopes, and internal struggles. We can recognize something of ourselves in them, even as their flaws drive us crazy.  We want them to succeed, even as we wince at some of their assumptions and decisions.

This is told against the backdrop of a culture that can never forget tragedy and death are inevitable, and that the price of life is someone else's blood. The themes are big and the devices, such as doubling, work to give the story depth and complexity beyond the usual dystopian story.


Juliet shook her head. "The word for justice is … I can feel it. Not just as an idea in my head, something I was told or that I made up. It's like the way the sun rises, or stones fall to the ground. It's infinite and eternal and closer than my heartbeat. And when people are hurt—even people who die and are gone and become nothing in the darkness—people my family would say I should care nothing about—I can feel justice scream against it. Nobody in my family understands that. They all think justice is just for use, some kind of—of instructions on how to keep us safe and headed toward the Paths of Light. It's not. It is real and it wants. It wants to reach into every corner of the world, and I was to make that happen. That's what I wanted. To bring justice to the whole city, and not just my people" She drew a ragged breath and fell silent.

Oh, thought Runjo. Her too.

She hadn't known there was anyone else.

A third of the way into this book I realized I was reading a major work of fantasy by an author of immense talent. Is this how people read when Dune was being serialized in Analog magazine? When the Lord of the Rings only had The Fellowship of the Ring published? That they were witnessing something extraordinary?

I can't tell if this book will measure up to those standards yet because it is, unfortunately, being published in two parts. That's annoying. So very annoying. I don't know who planned it that way but whoever did it was wrong to chop it in half. Chop being the operative word.

Nevertheless, my gut feeling remains. This is an incredible book that I cannot wait to finish.

NOTE: The most unfortunate part of the review galley is that it didn't mention that this was the first of two parts. The end was incredibly confusing until I wrote the author to find out what was going on. So if they haven't had the courtesy to make it obvious in the final book, I'm mentioning it here.