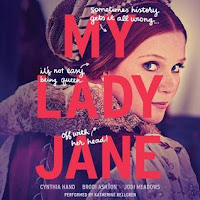 A one-of-a-kind fantasy in the tradition of The Princess Bride, featuring a reluctant king, an even more reluctant queen, a noble steed, and only a passing resemblance to actual history—because sometimes history needs a little help.

At sixteen, Lady Jane Grey is about to be married off to a stranger and caught up in a conspiracy to rob her cousin, King Edward, of his throne. But those trifling problems aren’t for Jane to worry about. Jane gets to be Queen of England.

A GoodReads friend had so much fun reading this that it seemed like the perfect summer book ... and I luckily had an Audible credit burning a hole in my pocket so I plunged it.

For what it was — a humorous, inventive, light, romantic, alternative history — it was practically perfect in every way. It was sometimes silly but always charming and I was glued to it in every spare moment.

There are intrigues, betrayal, arranged marriages, inconvenient shapeshifting, pickpockets, notes slipped under doors, swashbuckling, blackberries, and men with big noses. Mixed with a smidgeon of history. And romances. I can't recall the last time I've been so invested in whether people would kiss.

One could see the major plot points ahead but that didn't matter. The fun ride is the thing wherein the reader is caught.

The story is told from three points of view (Edward, Jane, and Gifford), each of which was written by a different author, but I had to read that information to be sure of it. The story style flows smoothly without any obvious style breaks.  Narrator Katherine Kellgren was over the top sometimes in a way that startled me at first but soon saw perfectly reflected the story. The various accents and voices were perfectly performed.