Joe's Back and This Time ... It's Biblical: Reviewing The King of Plagues by Jonathan Maberry 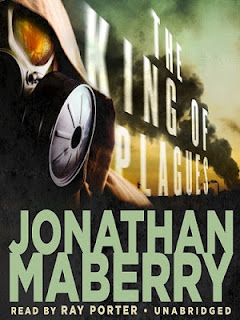 ... He paused. "Tell me again what Scofield said to you. About the river of blood."

I closed my eyes and found the words. "'They said that if the rivers didn't run red with blood, then the blood of my family would run like a river.'"

"Yes. That troubles me."

"All of it troubles me. The phrasing doesn't match the rest of what he said. He was clearly quoting, or attempting to quote, something that was said to him. It has a distinctly biblical structure to it. Rivers running red with blood. You're going to need a different kind of specialist to sort that out. Not my kind of job ... I'm a shooter."

When a huge London hospital is rocked by bomb blasts, thousands are dead or injured. Joe Ledger arrives to investigate and within hours is attacked by assasins and then sent into a viral hot zone during an Ebola outbreak.

Joe has tangled with zombies and he's battled with dragons. Now he's up against the seven plagues of Egypt, the best that bio-engineering can provide. What would the seven plagues be without a secret society concocting them for our doom? Not much, of course, and The Seven Kings have a worldwide conspiracy that will test Joe to his utmost.

I especially enjoyed the fact that, unlike the previous two books, readers do not know what the terrorists are planning. Each new attack is experienced along with Joe Ledger as unthinkable plagues descend first upon one place and then another.

That said, the book is still fairly straight-forward about most of the "mysteries" Joe encounters. A young researcher's family connections seem obvious, as does the source of the final attack that Joe and his team must stop to save the world.  Misdirection may be the hallmark of the Seven Kings but it isn't something that Maberry seems to worry about too much. If it works, then it works. If not, well there is still a ripping good thriller to read.

Interestingly, Maberry includes a henchman with more of a conscience than one expects in a conspiracy of unfathomable evil. This follows the trend of The Dragon Factory where Paris, though capable of committing abominable individual acts, draws the line at mass destruction or EVIL as Maberry would call it. Does this mean there is lesser evil and greater EVIL? Or is it rather like saying that Hitler loved dogs so he had a good side to his personality? I'm not sure just what Maberry is getting at, but it is a very interesting development in his villains.

Villains aside, there is not a lot of character development because it simply isn't that sort of book, although we do get a bit more light shed on the mysterious Mr. Church. I also enjoyed the addition of Joe's dog, Ghost, who seems to have almost supernatural abilities of his own as the most perfectly trained attack dog ever. (But, let's be fair. What other sort of attack dog could keep up with Joe?)

On the negative side, an audio book is not the ideal way to experience some of the torture used on the people forced to help The Seven Kings. It is what one expects from this sort of thriller, but one description was enough and we were treated to several. Also, the description of the Biblical plagues and the contest between Moses and the court magicians was one of the worst I've ever heard. It wouldn't have taken much to remove the idea of "God teaching Moses magic" and tell the original story. It certainly would have taken nothing away from the book. However, this is quibbling and not something that is going to dampen most people's enjoyment.

Ray Porter continues to do a pitch perfect job narratin the Joe Ledger books. His narration is a key part of the "Joe Ledger experience" for me and, as I've noted in other reviews, is the reason I prefer the narration to reading the book myself.

Fast paced and tightly written, The King of Plagues just might be the perfect summer superhero book. If you like your superhero as a hard-bitten shooter, with a white dog named Ghost, who likes nothing better than slaying monsters, that is.

This review was published originally at SFFaudio.
By Julie D. at July 30, 2012